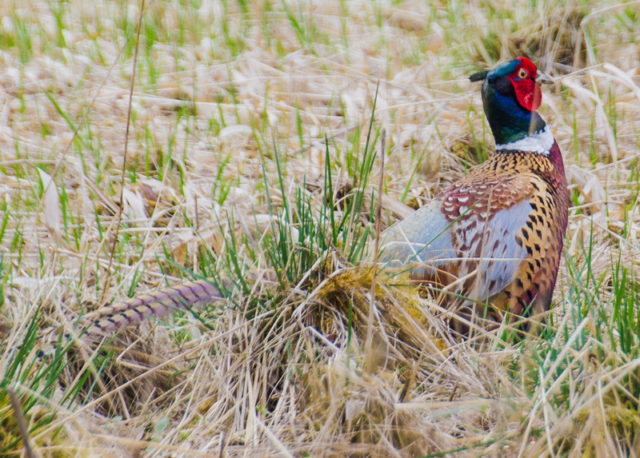 Today started off a bit cloudy, then the sun shone.

It didn’t stay for long though. The day soon degenerated to the usual cloudy with the threat of some rain and very short sunny spells. However, the temperature was high enough to convince me to go out for a walk while Gems were practising.

Drove down to Auchinstarry, parked and walked along the canal in sunshine. Grabbed some photos of some Tufted ducks. Then walked across the plantation and on to Dumbreck Marshes where I found today’s PoD. The brightly coloured pheasant is one of the stupidest of Scotland’s birds. I really do not know why they are not extinct. This one must have seen me wearing a bright blue anorak, but did it fly away? No it did not. It ran away in front of me then went back to feeding turning away from me all the time. I think they must be related to ostriches because the do the equivalent of sticking their head in the sand. They just turn away from you because, as everyone knows, if they can’t see you, you’re not there. Eventually it did fly for about fifty yards before crashing back down again. Maybe their brains are so small they can’t work out how to make the transition from walking to flying. That’s the problem with having a single core brain. Even if it had a dual core it could make the leap from running to flying. The bird that evolution passed by. Maybe more dodo than ostrich. Nice colours though.

Came back and made pesto pasta for dinner. Then it was time for dancing.

Managed a few minutes in an empty room at the STUC for some ballroom practise. I think I’ve finally got the idea of the walking backward part of the waltz. Hopefully it will be good enough for Michael on Wednesday.

Advanced 1 was quite interesting and the class were doing well with Niagra. Advanced 2 did Setenta e Jani (pronounce ‘yani’). I’m not sure I’ve actually mastered this one yet. Time will tell. After that it was Enchufe Moderno which I’ve totally forgotten and something called ‘The New One’. Good fun though.

Just found out that I picked up a tick today. First one this year, in fact, first one for a long time. Little bugger was sitting under my watch strap. A common place to find them.

Tomorrow I’m meeting Fred for coffee. Nobody else is available.