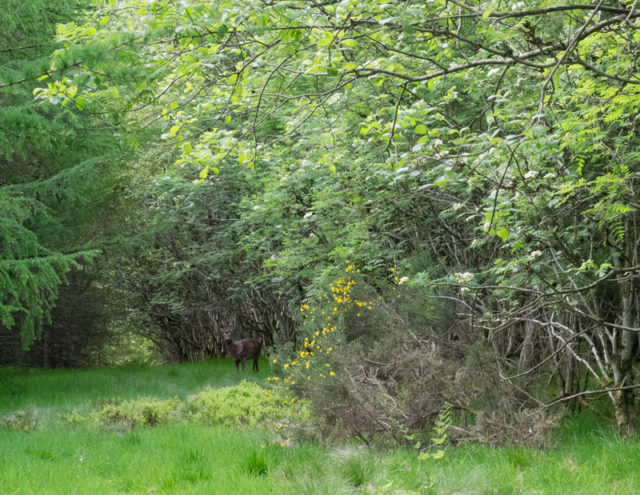 Blue skies all around at 8.30 and the day ended that way too. Cloudy between those limits and cold too. Though some don’t feel it!

Scamp went out for a walk after lunch. I don’t know what I did to find myself left at home, but she decided she didn’t want a grumpy photographer who stops every ten minutes or so to take a photo or to look at an ‘interesting’ insect to accompany her. Maybe it was something I said. She walked round Broadwood Loch and said that it was busy in clumps, but not all that congested. She also said it wasn’t that cold, but that doesn’t mean anything, because Scamp doesn’t feel the cold. It could be snowing outside and she’d tell you it wasn’t all that cold.

While she was out, I was rebuilding the little 9mm lens. If you’ve ever had to do work on a car or any mechanical item, you’ll know that sinking feeling when you’ve just put it back together and find you’ve a handful of washers or bolts, usually tiny ones, when you’ve finished. That’s how it was for me yesterday. I had it rebuilt, then found I’d three tiny washers left and the lens wouldn’t work. Today I’d worked out where the washers came from and thankfully it wasn’t a complete strip down to replace them. I soon had them in place and everything joined up, but still the lens wouldn’t focus. Checked the workbench and found a spring that should have gone back in and hadn’t. Another strip back and replace. This time the lens worked … sort of. It now focuses at infinity, but a bit like Buzz Lightyear, it also goes beyond infinity. Something is still not right, but at least it is now useable.

Did I find out what caused all this “reduce to component parts and rebuild”? Well actually I did. It was a mark on the outside of the front element. Not a scrape, just a dirty mark. The white dot I saw on the back element was actually the reflection of the window on the extremely curved glass. Numpty!

It was only after I rebuilt it the umpteenth time I realise this, but the problem with “Infinity and beyond” had happened before, now I think about it. Two days ago a few of my shots with that lens were fuzzy and out of focus. It is simply wear on the little plastic focus lever on the lens which now moves further than it should. I need to remember not to do the Buzz Lightyear thing, and stop at ∞!

With that problem, not exactly solved, but an explanation found, I went for a walk to St Mo’s and got today’s PoD. I was sure I had heard something crashing through the trees and then a deer ran across the path in front of me. It was followed a few seconds later by another deer, this one was definitely a buck. It stopped on the path, about 100m ahead of me and stared at me. I didn’t move. I’d been walking, cradling the camera in the crook of my left arm. I slid my right hand over and flicked the ‘on’ switch then grabbed four or five shots while pointing the camera in roughly the direction of the deer. It took a few paces towards me and I must have moved slightly before it headed off away down the path. I’m guessing it’s mating season just now and I may have interrupted something! I’ll take a long lens with me tomorrow if I manage to get back out there at the right time.

Today’s prompt was “Toilet Rolls”. Interesting topic that in any other year would have brought questioning looks, but this time in this year, it just brings a smile … and a sketch of toilet rolls!

Tomorrow we have no plans. Maybe a walk together.