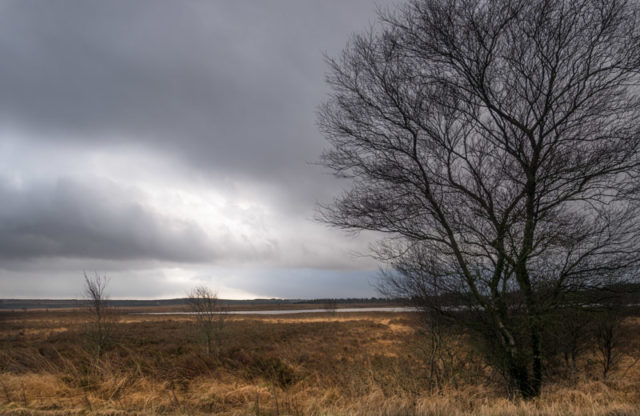 But before we come to that, it was a windy, wet day, but I posted a letter, solved a problem (perhaps), got rid of some stuff and I got one decent shot.

So, with Gems coming today and no Margie because she’d called off, I grabbed the letter and a bag of old laptop batteries and went out to solve a problem. The problem was the poor mpg on the Juke. I took JIC at his word and checked the tyre pressures. Front 31psi should be 36. Rear 29psi should be 31. The rear ones weren’t a problem, but the front ones certainly were. Crouched in a heavy rain shower and got them all up to the recommended pressures with the automatic pump at the petrol station, because I don’t trust my old pump that plugs into the lighter socket. It seems to be working JIC. Mpg seems to have improved after a very rough and ready check. Will keep you posted.

Next on the list was the letter. I’d recently signed myself fit in mind and body to drive a motor vehicle and was given a new plastic driving licence free of charge on the understanding that I’d cut through the old licence and return it to the DVLA. I cut it up over a week ago and today I posted it away.

The stuff I was getting rid of was a collection of old laptop batteries. Two HP and two Apple batteries. Easy peasy, there is a metal container at the recycling centre where you can drop them off. There’s a load more stuff that needs recycled from the back bedroom, but that can wait until next week.

With that all done, I drove up to Fannyside Moor looking for some inspiration. It came in the form of a bank of cloud lying over the loch. I’ve photographed that tree for many years with many cloudscapes behind it and with varying degrees of success. Today wasn’t one of the best, but it recorded the day.

With that I drove home and started to make dinner. Tonight it was red pasta day. Just a basic sugo with some finely chopped shallots and mushrooms mixed in. Seemed to work well.

Now the dancing. We started with the Saunter Together which I thought we’d mastered, but I was wrong. After a couple of dummy runs we did a passable version of the first part, but the second part still eludes me. Next was Foxtrot and I was confident we’d have that off pat. Again I was wrong. We just kept making mistakes. I got lost. Scamp was determined to turn the opposite way from the one I was trying to turn her in (for once, I was right too!). We just made a pig’s ear of it. Finally the Waltz, and finally we found we could dance that. Not perfectly, but definitely much the best of all tonight’s dances. Only stayed for an hour because our brains were befuddled. 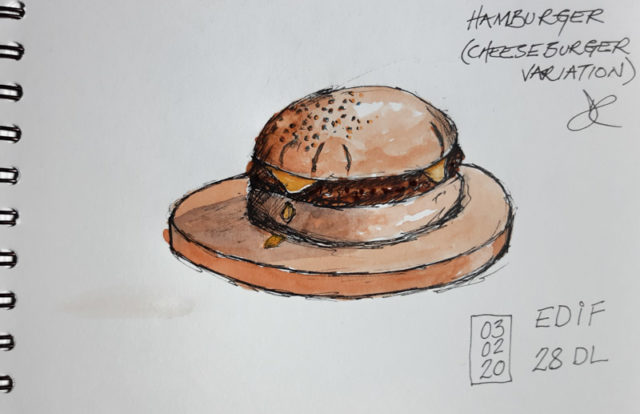 Came home and I sketched tonight’s Burger. I don’t like salad on my burger and I detest mayo on it too, so my burger is a hamburger with a nice piece of melted cheese. If I’m going to have to draw and paint it, I might as well make it the burger I’d actually eat.

So, some successes and some work in progress. Wind seems to have died down a lot after a very stormy night last night. That said, it was sleet that was falling when we were on the way to the dance class tonight.

Tomorrow no real plans. Maybe move the settee round and clear the floor for some Foxtrot practise.