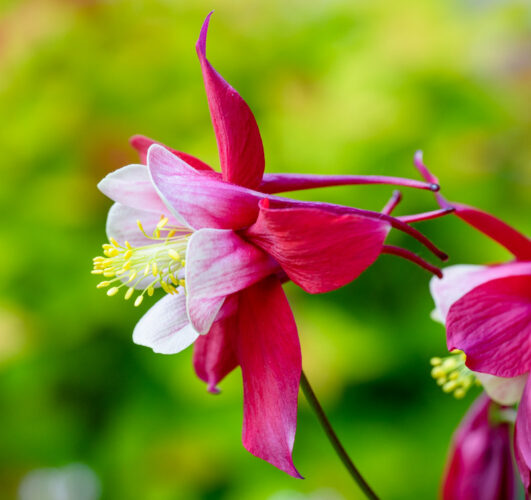 We couldn’t decide what to do today. We did think about going up the east coast to Kirkcaldy, but then thought better of it because today was a Saturday it would be busy. Instead we waited for the postman.

The postman brought a big parcel for Scamp. She already knew it was coming so it was not a big surprise. Inside was a long green box with a recipe and ingredients to make a cake. JIC gave me the present of a bread making subscription for Christmas. It’s been great, encouraging me to bake breads I’d never have tried otherwise. Scamp’s green box contained a similar thing, but for cakes instead. I did think, after I bought it, that it was a bit cheeky, sending a brilliant baker like Scamp a baking kit, but I’m hoping that, like me she’ll discover interesting cakes to bake. Ones she’d never have considered without that little push. Also, hopefully, I get to taste the results!

With the parcel opened and the on-line signing up done we set off for Bishopbriggs to get another USB drive to back up my photos on. It’s part of my complicated back up regime for ‘easy’ retrieval. It always amazes me that every time I go to buy an external drive I can get twice the storage space for the same price I paid for the last one. It’s something akin to Moore’s Law (Google it).

It was at the retail park that we bumped into Mhairi and Robert who used to go to Salsa with us. We spent a good twenty minutes discussing the effect of the pandemic on small businesses like theirs, some good and some bad. Good to speak to folk we hadn’t seen for a long time, years, in fact.

On the way back we stopped at Lidl in Kirkintilloch, hoping to get a bottle of Hortus Gin. Unfortunately they only had the flavoured varieties and I wanted the plain and simple one. What amazed us when we arrived was the queue to get in to the drive-through at McDonalds. Who, in their right mind, would queue to get a hamburger that’s never seen any ham? Maybe the clue is in that phrase “in their right mind”. How many of them have actually tasted real meat? We drove on to Kilsyth where there were ample supplies of Hortus and no Mickey Ds. Obviously much more sophisticated tastes in Kilsyth

Back home we went for a walk in St Mo’s and just managed a glimpse of the new cygnets. They were off with mum and dad to get some food over in the reeds at the far side of the pond. I’m guessing it was their equivalent of a walk to the shops. I hadn’t really managed a decent shot today, so I bolted on the macro lens and photographed the Strawberries and Cream Aquilegia that sits at the front door. Beautiful flower. Instant PoD.

We had a practise of the Cha Cha tonight. Who knew it was so exhausting? Then to cool down we did a couple of Rumbas. Things fell apart and tempers frayed when we tried the waltz with its Stewart’s clumsy addition of a spin where there shouldn’t be one. We agreed to continue on to the Catherine Waltz. Then to save bloodshed we put the living room back into a living room again rather than a dance floor and a war zone! 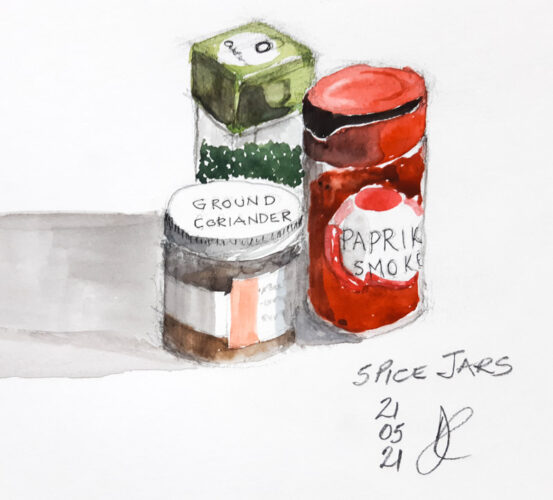 Yesterday’s sketch has appeared and its title is Spice Jars. I don’t know where it could have been hiding 😉. Today’s prompt was Dice, so today’s sketch is titled Lucky Sixes! 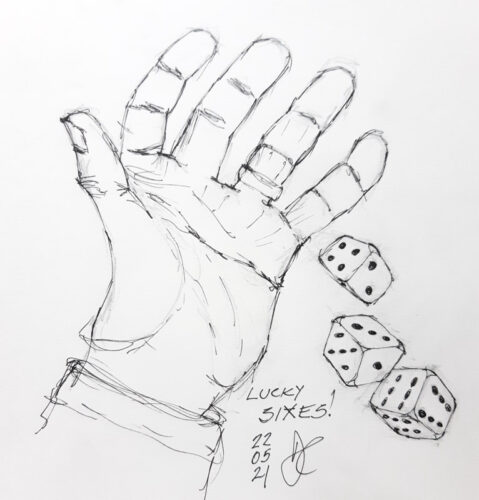 Tomorrow looks wet. Some baking may be done by one or both of us.