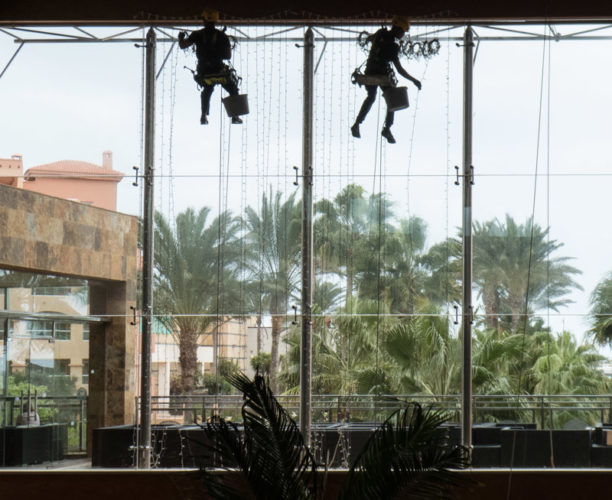 I’d tried to avoid it, but Christmas is coming.

This morning, the inevitable happened. We’d been waiting for it and watching the weather forecasts. Pulled back the curtains and there it was. Rain. Not terribly heavy, but it was there blowing in on that constant north wind. Hmm, let’s have breakfast and make plans for the day.

Breakfast is the first chance you get to over eat in this place. I’m trying to meter my fruit intake because too much isn’t too good for my insides, but a little is good. I’ve been trying to have cereal on most mornings, then an omelette with some bacon. What are called ‘English Sausages’ have the shape of British sausages, but the content is partly sawdust, partly stale breadcrumbs and partly something else I don’t want to consider at this time of the morning. Bacon is fatty and salty. Both of these ingredients are essential to giving it a bit of taste. The omelettes are excellent and enormous.

After the morning repast we noted a fair bit of activity in the hotel. Three blokes kitted out with carabiners and ropes, clinking around with hard hats on. Then we realised they were there to put up the Christmas lights. All the way down from the ceiling on the enormous window wall to the floor. Oh dear, it’s almost Christmas.

While Scamp read in the hotel, I attempted a sketch of the rear of the hotel with its chairs, tables and palm trees. Half listening to the chatter around me of people whose plans had been thwarted by the now lessening rain. Soon it stopped and so did the sketch. Time to go for a walk.

We’d hear that the market was on in Caleta today and walked down the main drag to find that the rumours were untrue. Not a Looky, Looky man in sight! Continued on to The Trafalgar, the English pub in the town. Lunch was a bowl of hand cut chips washed down with a mug of Nescafe coffee. One of Scamp’s traditions is coffee in the English pub. After that a pint of lager each washed the coffee down!

We walked round to the harbour which is now much prettier and less interesting than it used to be. After that we crossed the sands to cut off a large corner of the road back. Today wasn’t just cool, it was actually getting cold. Scamp, of course, disagreed!

In the afternoon I went out to get some more bird pictures using the 4K setting on the camera. This time the subject was Ringed Plovers, but the abseilers got PoD.

There was a Variety Show tonight, but we’ve been to one of those before and there was very little variety on show, so we decided to give this one a miss. Played Rummikub for a while and called a halt to the day.

Tomorrow we may go to the market. We’ve checked and it is on tomorrow.