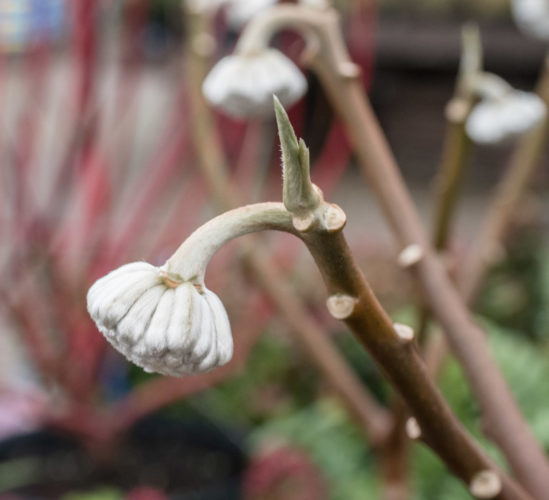 Today was one of those lost days.

All of us knew we were on a countdown. Even Vixen seemed to realise that all was not as well as it should be.

Jamie drove us all to a garden centre. I got some seeds, Scamp got a screen cleaner for her car and J&S got seeds of the planting variety and of the bird feeding variety too. We had coffee and cakes there, of course. That’s how garden centres manage to exist during the winter. It was good to see the Christmas decorations coming down to leave room for the spring plants, no doubt. Saw and interesting plant, the Paper Bush (edgeworthia chrysantha) and that became PoD. Also noticed a lot of dead fish lying around the fish pond. Various explanations were proposed, but my best guess was a heron.

Back home for lunch and to say our goodbyes to Sim and Vixen then it was the long drive to the airport. JIC doesn’t seem to mind the long drive and I used to enjoy them too. Not so much now, or maybe I’m just not so used to driving now that I’m not having to do a daily commute. When the days get longer and the weather gets warmer, maybe I’ll do a bit more.

Grabbed a quick snack at the airport and soon were called to the gate and on to the plane. Pleasant flight up. It’s strange to be on the plane for just an hour. We’re so used to the three and four hour flights to warm places, not to mention the seven hour flights to Trinidad. Excitement at Glasgow when the plane was met by four police who huckled two slightly inebriated guys off for questioning and a bit of finger wagging. When we entered the terminal, there they were getting a severe dressing down. While we waited for Scamp’s luggage they reappeared swaggering in the door. Not in the least looking worried and proceeded to take some selfies with a couple of older women who apparently had spoken up for them to the police. We hadn’t heard any commotion on the flight, so either they had been carrying on at Stanstead or it was just a bit of over reaction. Well done to the ladies for standing up for them.

Drove home and had a wee glass of G&T to settle us down.

Tomorrow we may need to go for messages.