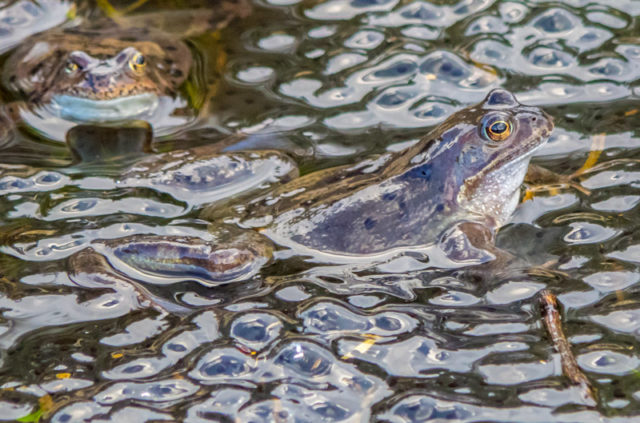 No, not plagues of them, that was in Egypt. Here it was an invasion of frogs.

In the morning it was bread making that was occupying me. I got that done fairly easily. Forget all the rigmarole of different kinds of kneading, the last three loaves I’ve made have used the same method.

The rest of the process is simply the baking. You’ve done the hard part, the kneading. Easy kneading.

So, with the dough sleeping, I started on my dinner.

Dinner for me was slow roasted short ribs. Scamp took the easy option, salmon fillet. The ribs had been living in the freezer for almost a year, so I had brought them out yesterday and allowed them to thaw out. Today I mixed up my marinade which is Oil, Salt, Acid, Sugar and herbs. All as confirmed by the book Hazy bought me a year ago. Thank you again, Hazy. Olive Oil, Sea Salt, plus some Soy Sauce, Balsamic Vinegar, Honey with some Rosemary and Thyme. I added a bit of French Mustard to help the oil emulsify with the other ingredients once I’d whisked them together. Poured equal quantities of the marinade into three flavour lock bags and put a short rib in each. Stuck them in the fridge to soak up all that goodness and went for a walk.

Walked over to St Mo’s in the rain and found the inundation of frogs I’d mentioned. A week or so ago I’d found a couple of frogs cavorting in one of the wee burns that someone had cut through the woods, but this wasn’t just a couple, this was a couple of hundred. Clambering over one another and creating great rafts of frog spawn. Last year’s frogs were a bit low on IQ and had sprayed all their eggs over the flooded flood plain. When that dried out they were let to desiccate under the early summer sun. It’s really a miracle that any survived to procreate this year. Today’s PoD is one of those frogs relaxing after a tough morning.

Back home it was lunch first, then time to shape the bread and help Scamp clear out some stuff to go to the skips tomorrow. Roasted the marinaded short ribs but left them too long. Should have kept them at 2 hours, but turned the heat in the oven down to gas 2-3, I think. May try again some time soon.

Spoke to JIC later and got his take on panic buying and Covid 19 which hasn’t changed since last week. Keep Calm and Carry On is his sensible advice. Mine is Whit’s Fur Ye Won’t Go By Ye. Pretty much the same thing. Why is everyone fixated on panic buying toilet rolls and why do people want to buy all the tinned veg and potatoes? Who wants to live on tinned potatoes?? Not JIC and not me either.

The recipes above are for my reference and as a memory jogger for me, but feel free to try them. No guarantees of success, but they do work and the Oil, Salt, Acid, Sugar marinade definitely works. It’s even scientific (ish).

Tomorrow my new Benbo, not Benro and certainly not Bento, tripod should be delivered to a shop in Glasgow. Wrestling an octopus is one of the more generous descriptions of using it. Hopefully I’ll let you know if I agree soon.