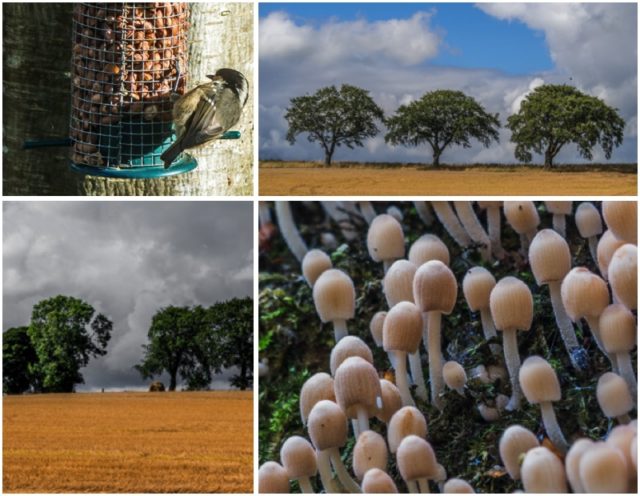 When I was making breakfast this morning I saw a coal tit having its breakfast of peanuts in the garden.  Grabbed the Oly and got a dozen shots.  Two of them were fairly sharp and showed a bit of detail in the bird.

Physio later in the morning and it looks like there is quite an improvement in my shoulder, but I’ve to keep doing the exercises and continue being a pincushion.  I was amazed when the physio (David Brogan) showed me his cycling shoes, made from carbon fibre with dial-in adjusters to tighten them.  I didn’t dare ask him how much they cost.  It looks, JIC, as if his whole bike is carbon fibre.  It’s a Wilier.  A Beautiful machine, designed for racing and that’s what he does with it, I think.

After lunch I took the bike out.  Poor wee thing had been languishing in the hall for so long, its computer had gone to sleep.  Anyway, despite a fairly strong west wind, I headed out for a bit of exercise.  Nothing too strenuous.  Half an hour of cycling and then an hour or two searching out some interesting things to photograph.  The Three Amigos were an easy candidate, but getting a decent viewpoint was a bit more demanding.  I finally settled on leaning on the fence by the railway to get a usable shot without the intrusion of the overhead lines for the electrification of the line to Embra.  Big push to get all the gantries and cables in place and then for some reason it’s going to take another seven or eight months before they will be used.  That’s British efficiency for you.  In my wanderings I found hundreds, perhaps thousands of tiny little toadstools on a rotting tree stump.  I got a few shots of them, because fungi in general grow, seed and die in a very short time span.  Better to get the shots when I can and hopefully get some more later when I’ve got the proper equipment (tripod) with me.

We had dinner booked at Cotton House for 6pm, so I took the shots I could get and headed home hoping for a tailwind and with thoughts of Chow Mein in my head.  I got both.  See, even when you’re retired, you can still have That Friday Feeling!