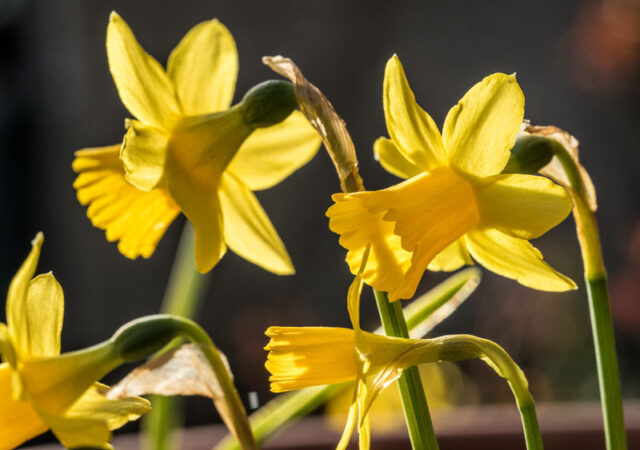 Not quite in that order, but does the order matter? Not to me, it doesn’t.

Let’s start with Mojave. On this beautiful spring day I decided I’d back up the iMac and install Mojave. I’d downloaded it a few months ago. Said goodbye to Sierra and ran the installer. Oops. Got this message “This copy of the Install macOS Mojave application is damaged, and can‘t be used to install macOS.” Ok, no problem. I’ll just download another copy, except… Mojave is not listed in the Apple App Store. I finally found out how to download it. You first have to put the original installer in the bin then empty the bin. Next you have to restart the machine. Once it’s restarted, you must use Safari, Apples clumsy browser and then there is a path to the App Store that allows you to download the installer. Why this devious path to a free download?

It’s just a ploy by Apple. They want you to install the most up to date version of the operating system, currently Big Sur. It’s the only version available to download openly from the App Store on Firefox, Chrome or any browser except Safari. It seems that the reason they keep hiding older versions of the OS is to keep you moving on to a new OS every year or so until you can’t upgrade any more and a new computer is the only way to upgrade the OS. I’ve read this explanation many times today in different words, but all with the same theme. Apple was always seen as wearing the white hats, but like politicians, they’re all as bad as each other!

That was the morning. Later in the morning we were off to B&M to shop for a new pot for the Pieris that has been looking a bit sad since the end of last year. Also we needed new rechargeable batteries for the solar powered lights in the garden. Got both and both fitted in Scamp’s car. After lunch we were back out again in Blue this time to get ericaceous compost to pot up the plant and another bag of general purpose compost to top up the raised bed. Got both and some other incidentals.

Then the hard work began. We struggled to get that pieris out of its old pot, but it was jammed in solid. There was absolutely no give. Eventually I’d to use a hacksaw to cut the pot away. Then lifted it into the new pot and packed the ericaceous compost gently into the gaps. That should give it some growing space for a year or so. Scamp gave it a good watering, but it will need more tomorrow. I’ve rarely seen roots so packed into a pot.

We agreed that tonight we’d have fish ’n’ chips from the chippy in Condorrat, so I headed off just after 4pm. I saw the daffodils when I was leaving the house. They were shining well in the sun, so they made an easy PoD. While I was waiting at the chippy, I was eyeing up a couple of meringues in the window. Got my order in and while I was waiting I noticed a rack of cannoli, little Italian deep fried pastry shells with a sweet ricotta filling. Just to test them, I got two meringues and two cannoli. They were just as good as any we’ve had in Italy. Only surpassed by ones we bought in a cafe in Venice. The meringues were also delicious. 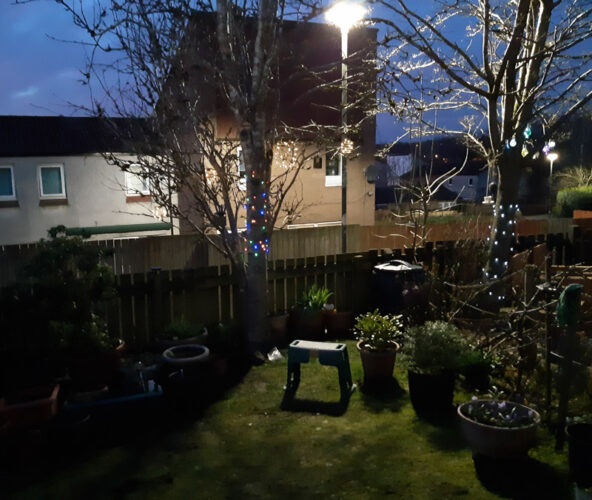 That was one busy day with a lot of hard work done. The pieris looks happier already. The lights are on in the garden. Hopefully tomorrow will be more relaxing.