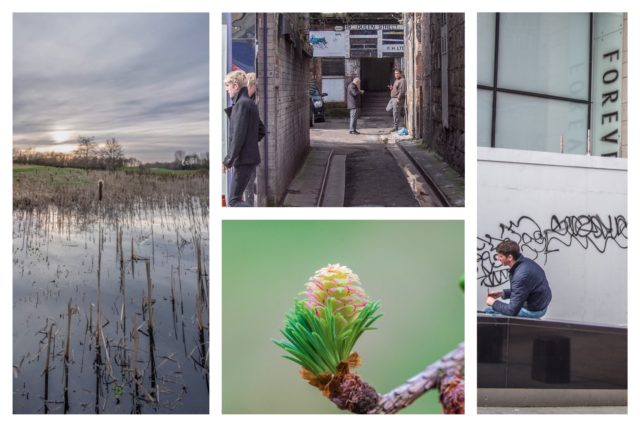 Today is Scamp’s birthday.  She had chosen to go to see the live sized portrait of Graham Norton by Gareth Reid in Cass Art and then go for lunch at Vecchia Bologna, so we set off on the round trip after parcels and cards had been opened.  Also after we had a Skype call with Hazy.

As well as visiting the portrait artist’s exhibition, Scamp did a bit of shopping and we had a coffee before returning along the M80 to Bridge of Allan to Vecchia.  Unfortunately, when we arrived the usual waiter came to meet us and tell us that the kitchen had closed early and they were not taking any more diners.  Oh well, there was nothing for it but to head back along the M80 again because Scamp had chosen Milano as her second choice of lunch venue.  Almost as good as Vecchia, but not quite.

When we got home, I helped her out of her massive crepe bandage and got her settled and headed off to St Mo’s while she was on the phone to Jackie.  Got a few macro shots of larch flowers, looking like miniature pineapples.  Also took a four shot vertorama ( vertical panorama ) which I later merged together in Autopano.

Tonight being Red Nose Day, we chose a film from Netflix, only to find that the internet connection was flaky and we had to give up on it.  Ended up watching Steve Jobs from DVD instead.

Overall, not a bad day.  Not as good as it could be, but sometimes life is like that.