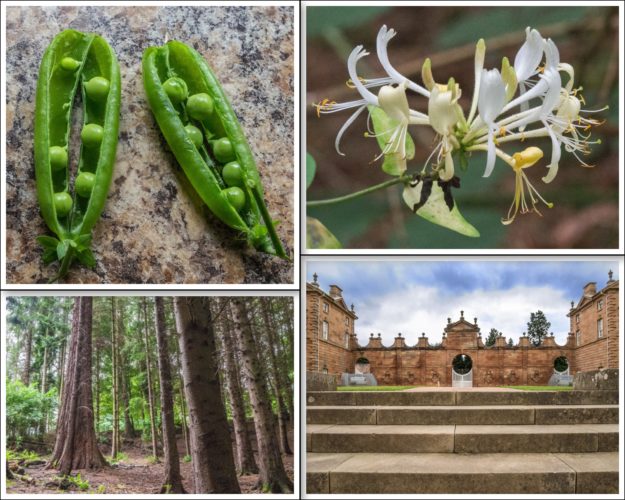 It was dry, not very windy and quite warm, so we went out for a walk.  Today’s choice of walk was around one of the paths at Chatelherault near Hamilton.  It’s a huge area with forest, grassland and interesting architecture.  The main building on the site is the former Hunting Lodge and Summer House for the Dukes of Hamilton and looks out over an avenue of trees which originally led down to Hamilton Palace which has now been demolished.  Behind Chatelherault is a large forested area of gigantic redwoods, pines and also some natural hardwoods.  The Avon Water runs through the estate and it was looking very fishable today with tea coloured water just running off a spate.

We left the car in the car park and headed for one of the shorter routes.  Shorter, but still quite demanding, especially to two walkers who will happily admit they are out of condition.  I think we need to visit the gym more than once a week to get back to a reasonable degree of physical fitness.  That said, it was an interesting walk.  Lots of ups and downs, muddy paths and demanding stairs to climb.  Perhaps it was because we were watching “The Hobbit” last night, but  the whole place had the feeling of the set for that film with thinning of the pines allowing the light to penetrate and made it much less gloomy than commercial woodland.  Unfortunately we didn’t see any hobbits.

There wasn’t much to photograph today, but it has potential if there is a bit more directional sunlight to play with.  I did manage to fake a shot of the frontage of Chatelherault with a bit of levels adjustment in Lightroom, then I pasted in a more interesting sky from one of yesterday’s shots.  The peas are two of the potentially five pods from our single pea plant.  I think I planted the other peas upside down and they are growing down the way.

Hoping against hope for cake tomorrow.