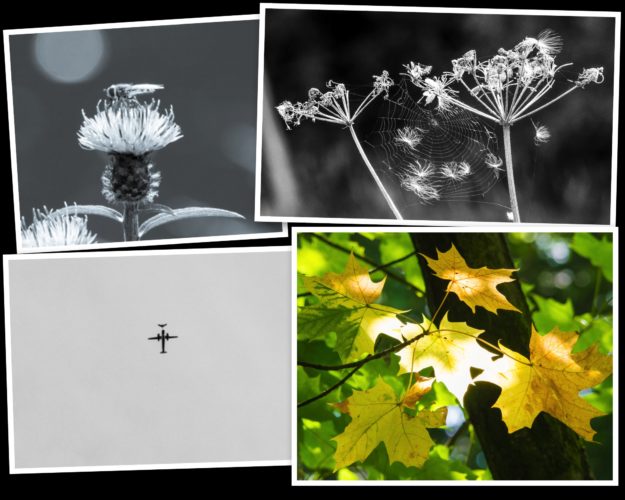 Well, we did have cake today!  Woke to sunshine that didn’t really go away all day.

The sun enticed us out and into the wide world.  We couldn’t agree on a destination until Scamp suggested that we go a walk along the canal.  Now I go there quite often, but it’s a while since she’s walked along it, so it was decided that we’d drive to Auchinstarry and walk along to Twechar and back.

Today was the day the teachers went back to work after the summer hols and as we were walking along the railway, I was thinking about all the times I’ve sat in the assembly hall at school listening to head teachers and deputes droning on about grade averages, STACs, child protection procedures and other dry, boring paper-pushing nonsense.  They always started with a jolly “Well I hope you’ve enjoyed your holidays and are feeling refreshed.  Here’s the bad news …….. “.  Drone, drone, drone.  It was essential to get there early, not to show you were interested, although there were some that did.  No, it was to grab the seats at the back where you could doodle unseen on the hundred page handout you’d been given with charts and tables and mind numbing statistics that meant nothing to anyone but the bean-counter who had created them.  “Can you see this Powerpoint alright at the back?” some depute would ask. “Yes, we’re just not interested.” we’d mumble in reply.

Ah, but while all my former colleagues were enjoying this annual festival of figures and meaningless jargon, we were out in the sunshine, admiring the flowers and the light through the leaves and counting the wee fishes and talking to the ducks.  It was when we were walking back along the canal towpath I heard what I thought at first was a motorbike before I realised that although the pitch of the engine was rising, it wasn’t changing gear and it seemed to he coming from Barr Hill which has a roman fort, but no roads.  I knew what it was then, it was a Piaggio.  It’s an Italian plane type called a canard.  Which is a plane with a wing towards the rear and two little winglets just rear of the nose which makes it look as if it’s flying backwards.  Some people think it looks like a duck, hence the name ‘canard’.  Some have actual tail fins and tail planes like a normal aircraft and some have jet engines, but most have pusher props.  That is, the propellers stick out the back of the plane and push it through the air rather than pull it like a conventional plane. (I like planes, in case you hadn’t guessed.)  I’d seen one last year at almost exactly the same place, but hadn’t got a photo of it.  I started taking my camera out of the bag and tried explaining to Scamp what it was I was so excited about.  She didn’t share my enthusiasm and said “Oh, so it’s a plane?”  I managed two shots of the Piaggio before it disappeared into a cloud.  Neither of them very good.  I’ve never managed to get a good clean shot of this plane.  You can see today’s effort above.  Maybe one day …

After we drove home and had lunch, Scamp wanted to work in the garden.  I dumped my photos into Lightroom and let it get to work on them.  Then we sat in the garden and read until it was time to make the dinner and then get ready for salsa class.  I had done my exercises from the physio this morning under a hot shower and they paid off while I was in the class, allowing much more movement than I’d had last week.  We were able to complete almost all the moves tonight which is proof that we are moving in the right direction.

Beautiful sunset tonight which augers well for tomorrow’s weather.  We’ll see what the day brings.  If it’s as good as today it will be very welcome.