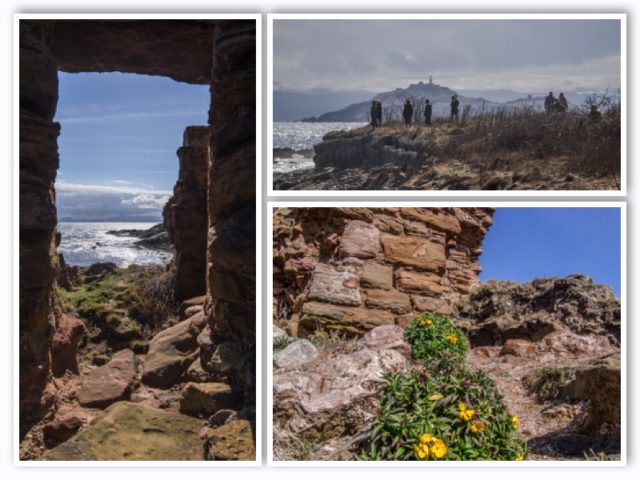 Today we were going out for a drive and hoping for a walk too. Scamp’s first suggestion was Devilla Forest, but when we got there, the circular car park was full and there were cars parked everywhere. On to Scamp’s suggestion number 2 which was Kirkcaldy and a walk to see the seals. Not really so bad as Devilla is about halfway between Cumbersheugh and Kirkcaldy.

We may have been about half way there, distance wise, but the twisty turny road and the 20mph zones made it feel much longer. It didn’t help when I decided to go a shortcut and found after a mile that the road was closed. OK, there was a sign in Burntisland, but it didn’t say clearly which road was closed. That’s my story and I’m sticking to it! Finally got to Kirkcaldy and parked with a great view of the crashing waves. Sat watching them for a while before we got out and got walking. Luckily we’d both brought boots because the path we were walking along was quite mucky. As usual, almost everyone else had a dog with them. I think we need to get a dog. Probably not a real one though. I remember JIC had a wee pull-along daschund. Maybe we should look it out and take it with us on our next walk. Then everyone will think we’re ‘normal’ walkers. Anyway, we found the ‘castle’ which is called Seafield Tower and used to be a grade B listed building, but was delisted from Category B in 2015 and has been a designated a Scheduled Monument, which smacks of “I wash my hands of it” by Historic Scotland.

It appeared that the seals which are usually there in herds sunning themselves on the rocks were on their Easter holidays and had jetted off to sunnier climes. I can’t blame them, with the prospect of more snow on the way tomorrow. However, we walked on a bit further in the vain hope of seeing some of the fat blubbery mammals. We’d have been better going up to Cumbersheugh town centre. We’d have seen a tumble-down ruin there and lots of fat blubbery mammals. Ah, but the sun was shining here!

Lunch was a cup of instant coffee and a Mars bar when we got back to the car. Then after a quick spin round Morrisons for bread, we took a much more sensible road home with no 20mph zones. Drove across the new Forth Road Bridge and home.

PoD is the view through the square window. One of the few left in Seafield Tower.  That really was a beautiful day and an interesting walk.  Isn’t it great when the sun shines and you’ve got someone you love to walk with.

Tomorrow is a day off. No dancing. No Gems. What will we do? I’ll tell you tomorrow DV.