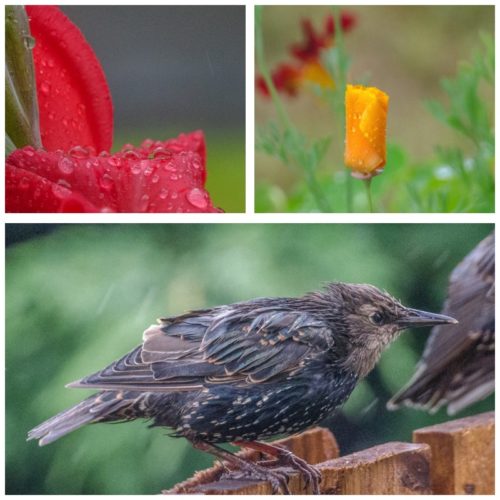 I’ve had the Nikon D7000 for over three years now.  In that time I’ve settled on it as my ‘good’ camera.  The one to use when quality is paramount.  I use it in manual mode most of the time and allow the camera to decide the best ISO setting to use within the limits I set.  I also use it in AF-S mode.  Single servo focus because I mainly photograph still objects, landscapes don’t move much and flowers, although they do move, don’t wander far from their stems.  Maybe too it’s that I’m a control freak and like to know exactly what my camera is doing and can predict how it will react in any given situation.  Today I started using AF-C for probably the first time since the early days just after I acquired the camera.  AF-C is Continuous servo focus.  The camera continually focuses and if the manual is to be believed, “if subject moves, camera will engage predictive focus tracking to predict final distance to subject and adjust focus as necessary.”  I am so glad that was cleared up, I thought it was going to be complicated!  What I do know is that it works and it keeps things in focus while they are moving, and even if I am moving.  That’s what I found today.  It never ceases to surprise me what this camera is capable of and I’m sure there are even more surprises hidden deep in the manual waiting to be discovered.

I went to the physio this morning and felt a lot better once he had stretched, manipulated and massaged my shoulder and neck once again.  Maybe it’s just that feeling when you stop hitting your head against a wall.  It’s so nice when you stop.  Went swimming in the afternoon.

I’m becoming absolutely pig-sick of the Olympics on TV.  Events over-running and programme schedules being changed with no notice.  News when it arrives an hour late crammed with results and interviews with athletes before we get to the nitty gritty of what’s happening in the rest of the world.  Only two more days to go and it’s finished, because it doesn’t look as if the Paralympics will be covered in the same way as the able bodied version.  Don’t you feel so sorry for the athletes in the Paralympics who have trained for years, only to find that in the eyes of those running these games, they are second best.

Weather today at home, as predicted, was wet from about 12midday and it stayed that way until early evening when it dried up.