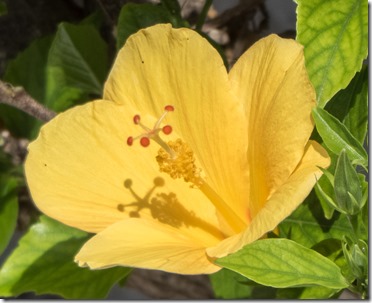 After breakfast we went for a rest beside the pool.  We’d been there for half an hour or so when this opinionated english woman came along and started throwing here weight about saying SOMEONE had moved her towels.  The pitch and volume of her voice got higher as she nearer us.  As if we would stoop to touch a towel an english person had used.  I nearly released my inner ned, but luckily for her, he stayed silent.  I just laughed as she got more and more incandescent.  We let her go and ‘appropriate’ more sunbeds to get back to the full quota, then we left to go up to the top floor.

On the top floor, a film crew were setting up.  After about half an hour the ‘star’ Gloria Hunniford (not Gloria Gaynor as some germans thought.  I think it was them that moved the english woman’s towels!) appeared.  We watched her speaking her piece time after time to camera interrupted by buses, wee trains and motorbikes.  It seems that just about anything can interrupt the sound on a recording.  Scamp plucked up courage and went and asked her if she could have her photo taken with her and said that she was very pleasant.  Thankfully the other two of her companions weren’t there.

Walked down to the beach later, when the excitement was over, to dip our wee toesies in the water.  Walked along the sand for quite a distance before we came back, had lunch and I posted yesterday’s blog. Went back up to the top floor once the blogging was done and had a quick swim in the deep plunge pool.  It was supposed to be 25c.  I think they missed out the decimal point between the 2 and the 5.  Before we went down I got a sketch done of the buildings next door.  Gloria had left the building!!

After dinner watched the kids show and then sat through a home-made film quiz.  Went and listened to a bloke playing the guitar and singing at the front of the hotel.  I thought he was quite good, but Scamp was not impressed.

Tomorrow will be hot apparently!