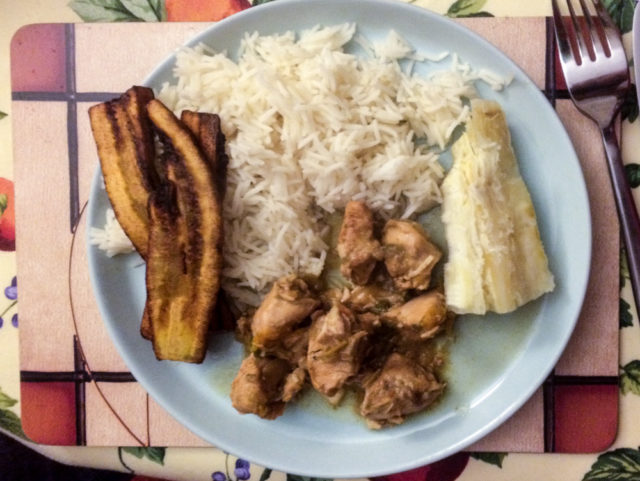 All day it rained.  It rained heavy, it rained light, it rained sleet with an outside temperature of 9ºc (!), it pretended to stop, just to catch the unwary before launching another torrential downpour.  We weren’t fooled.  We live in Scotland.  We have a hundred names for rain, just as the Inuits have a hundred names for snow.  Most of the words for rain are suffixed with ‘AGAIN!’, or prefixed with ‘STILL’.  Sometimes, in extreme cases, with both!

Lunch for me was last night’s curry reheated.  I hope you’re impressed, N D’Ag.  Not quite up to having it for breakfast – on toast, but getting there.  Actually it was very good.  Not as fiery as last night.  After that I settled down to do a sketch for 28 Drawings Later …  I wasn’t going outside to sketch.  Watercolours or even ink pens and rain just mix too well, but not in a good way.  In an experimental way, perhaps, but not a good way.  Today I went back to Trinidad, at least in a photograph.  The building is an old house at Mt St Benedict’s Monastery in Trinidad and it fair brightened up the day.

We had already decided on a Trinni dinner and that’s what we had.  It’s Stewed Chicken with boiled rice, boiled cassava and fried plantain. Definitely a work in progress, but the fried plantain, although soft was the star of the show.  Loser was cassava.  Too much of a faff.  We’ll take Madeleine’s advice and try frozen stuff next time.  We were going to have coconut ice cream, but we’re leaving that for later in the week.  The coconut has been drained, smashed, flesh peeled and blitzed and the pulp drained, so the hard work has been done.

The forecast is for a drier day tomorrow after a wet and cold start.