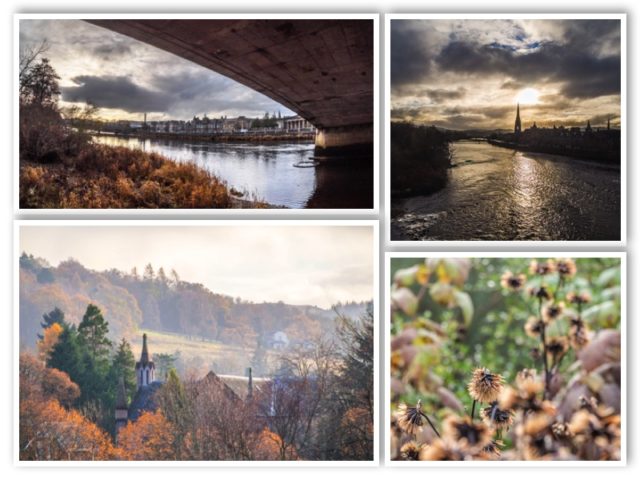 Just for a change today, I got the bus to Perth.  Now this may be a spoiler alert for Hazy, but I’m sure you expected I’d have to take the trip to Perth, didn’t you!

These CityLink buses are really comfortable.  Did you know they have heaters that work!  Isn’t that a simply wonderful innovation?  Typically one X3 bus in 100 has working heaters, and that’s the one you get every day in the summer and the heating is on full blast and the windows won’t open.  In the winter, it’s the one with the sign that says “SORRY NOT IN SERVICE” or more often in Scotland “A’HM NO WORKIN’”.  So, a comfortable journey north to the fair city of Perf.  It’s a bit like Embra which is also known by some of its inhabitants as Edinburgh.  Embra is its more usual and useable name.  Perf is much better than Perth IMO and MO is the only one that counts in this blog.  By the way, I once got an irate comment from an Edinburger on Flickr to the effect that: “It’s actually Edinburgh, not Embra, I know, I live there.”
My reply was: “That’s a shame, but I suppose somebody has to live in Embra, and it is Embra, hen.  It’s Embra, it’s always been Embra and it always will be Embra.  I know, because I’ve been there … once.  But it’s alright, I’ve had my jags.”  She didn’t reply to that – too many big words in it, I think.
Perf’s a nice place, I like it.  It’s pretty and has nice buildings, but the folk are not so stuck up as Embra folk.  It’s got a good coffee shop, an independent camera shop and a great second-hand bookshop too.

Anyway, purchases purchased I got the equally comfortable bus back down the road to less than scenic Cumbersheugh where they are painting the lovely butter coloured bricks of the town centre with a coat of ‘nearly black’.  Cooncil must have got a job lot of the paint going cheap.  I think it probably was originally black masonry paint, but they didn’t have enough to finish the job, so they got some equally cheap out-of-date emulsion for B&Q and just mixed it in to make the masonry paint go further.  That would explain the slightly purple tinge to the finished product.  If it looks boggin’ paint it black, that’ll fix it and make it look stylish into the bargain.  Aye Right.

Kizomba was a bit of a shambles tonight.  Class was a bit smaller with a lot of new faces.  Mainly black faces, so maybe friends of one of the teachers.  Also faces that were looking bemused most of the time because it appears this is the first time they had met this dance.  Methinks it might have been Rentamob, there to pad out the numbers.  ‘Left’ and ‘right’ seemed to be new concepts for some.  One girl had to be dragged away from her phone and on to the dance floor to help balance the numbers.  She was irate, because she didn’t know how to do the dance and didn’t want to learn.  Hmm, not impressed.

It also looked like our salsa teacher wasn’t present and no announcement was made about who would be taking his class. This gave us a bit of concern and made us wonder if it would be one of the, how should I put this, less able and teachers of AdS.  We needn’t have worried, Will took it and introduced us to a trio of twisty, turny moves that were a lot of fun.  The next class was not so lucky, but we were out the door by the time the music started.

Maybe going to do a painting tomorrow.  If I can remember how!