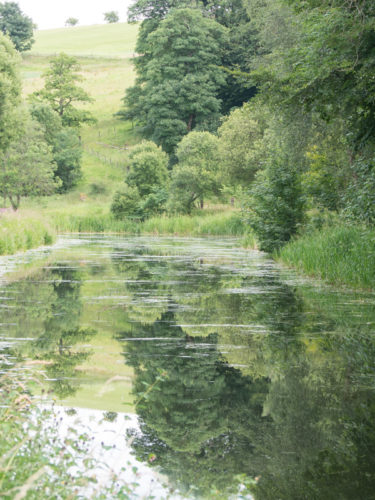 Up and out early to meet the torturer. Actually he’s a very gentle torturer who tentatively prods and pushes then presses on a spot a bit harder and, as I twist, says with a smile “It hurts there then!” Oh yes, it did! He swiftly diagnosed a damaged medial ligament. Caused by not listening to Michael properly when he was demonstrating the reverse turn. Then it was on to 15 minutes of laser treatment before he started with the needles. I’ve had acupuncture before, but it’s a while since I saw them going in. Oh, they are long! It’s a strange feeling seeing them sink deeper and deeper into my leg. He finished up by giving me two exercises to give a bit more flexibility to my core. I didn’t know I had a core, but apparently I do have quite a stiff core which is also part of my problem. These are exactly the kind of exercises that JIC warns that you do a couple the days before you go back to see the physio, but you tell him you’ve been doing religiously all week and you both know you’re lying! I’m starting out with good intentions.

Got home and it was just a few minutes after 9. Had a coffee, checked my mail, checked Flickr and the inevitable FB then went out to the garden and did a bit of light pruning. Chopped the seed heads off the aquilegia.

Came in to find Scamp washing half a dozen bone handled knives. Old ones. Probably older than me. Probably a wedding present to my mum and dad. Definitely so much better than modern stainless steel ones. The handles weren’t even bone, they were that modern plastic! The only down side is that you can’t put them in the dishwasher. When they were made a dishwasher was called a scullery maid.

While Scamp went off to buy some more flowers for the garden, I grabbed my cameras and drove down to Auchinstarry for a walk along the railway out to Dumbreck Marshes, then back along the canal, still hoping to see that blue flash of the kingfisher. It wasn’t there. It must be on its holidays. What I did see was a little yellow and black striped caterpillar. I knew I’d seen it before and I reckoned it was a moth caterpillar. Tried to review the last photo and got the message “NO CARD”. Luckily I’d only taken a few shots, but the SD card was indeed missing. Still in the slot in the computer, no doubt. Swapped a card out from the Teazer that was in my pocket and I was back in business. A few steps further on I saw another couple of stripy caterpillars and got the shot. When I was checking them back home on the computer, they weren’t all that sharp. The ones I missed would have been pin sharp and full of detail. They were indeed moth caterpillars, that would grow up to be cinnabar moths in a few weeks time.

They didn’t make PoD, the view along the canal did. I liked all the tones and hues of green in the shot.

Dinner tonight was Chicken Rogan Josh from the Spice Tailor series. Easily the best and simplest curry kits in the world. Coupled with basmati rice and flatbreads it made a delicious dinner.

Went to salsa because the physio said that was ok. Danced half the first class and then all the second amid cheers from the Scottish supporters in The Schoolhouse pub magically turned into AWPE (Anyone Who’s Playing England) supporters when Croatia equalised. Probably half of them didn’t know, or care, where Croatia was, just that they had beaten ‘the auld enemy’. I didn’t hear the final cheer, but then the music was quite loud. Doing La Confusion where men become women and followers become leaders. Probably the best named move we’ve ever learned, although some of the technicalities still evade me.  I was really glad of the fans tonight, nothing to do with football, but everything to do with staying cool.  It may be getting close to the end of the heatwave, and rain may soon be on  the horizon, but the temperature is still in the mid twenties and when you’re dancing in an airless atrium of an old school you need the fans to create a circulation of air.

Home with a smile on my face tonight. It was a good day.

Tomorrow? Maybe Dunfermline on the bus.