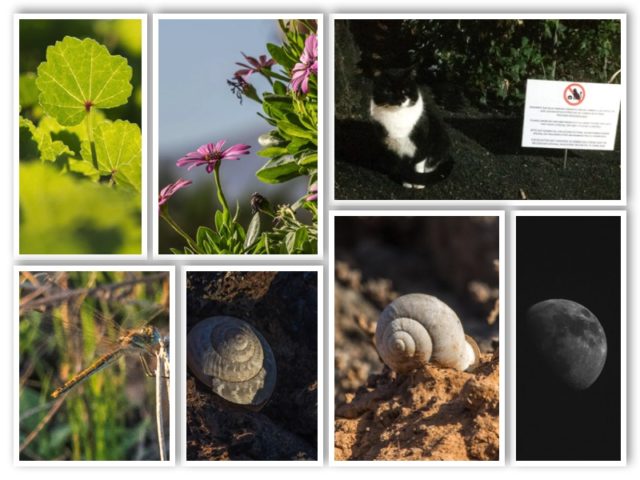 This being our last full day in Lanzarote 2016, we took our time and made the most of it, but took it easy too.

We sat by the pool for a while after breakfast because it was very warm, possibly the warmest of the days, but a cooling breeze kept the temperature within a reasonable range.  We stayed there until after lunch when we walked along in the direction of the airport, with the task of finding a coloured strap for Scamp’s case to make it easier to find on the carousel at Glasgow … when the moving belt eventually squeaks into life.  After selecting a suitable strap we settled in a bar with two mojitos.  Real ones, not the pre-made, out-of-a-bottle ones they ply the unwary with at the hotel, topped up with a teaspoon of their watered down ‘local’ rum.  These weren’t the strongest mojitos we’ve had, but they were very tasty and went down a treat.

While we were there we were earwigging a scam being played out by an old white haired bloke with a beard and his wife behind us.  Scamp was shocked at the length of the claws his wife had, you couldn’t call them nails, these were full-on talons.  Anyway the old beardy had got wind of the fact that a bloke who owned a bar in Arrecife had a backup battery for his own bar that he didn’t need and wanted rid of.  According to his electrician friend, the bloke in Arrecife didn’t know what it was worth and would be happy to sell it on for a fraction of what it was worth.  OK?  The scene has been set.
So, old beardy bloke and Eagle Claw are plotting their pitch to Mr Arrecife.  They decide that they’ll tell the bloke they are interested in his backup battery to use to keep their two fishtanks running when there is a power outage.  The electrician has already told them that this battery will run all the electrical requirements for a bar; fridge, freezer, air-con, pumps, lighting, the lot for 10 hours, and they’re going to tell the bloke that they want it to power their fish tanks.  It made we wonder just how bit these fish tanks were, or how ingenuous they thought Mr Arrecife was.  Beardy thought they could get the battery for under €400.  The phone call was duly made and either the electrician was playing both sides against one another, or Mr Arrecife wasn’t as stupid as Beardy thought, because a figure of €1500 was being bandied about.  The call ended with Beardy telling Eagle Claw that he could probably beat him down to around the €400.  I hope he’s got a good baseball bat to beat him with, either that or he’ll have to threaten Mr A with Eagle Claw.  We’ll never know the outcome.

We walked back to the hotel and while Scamp went for to grab some more rays, I went for a last walk over the lava rocks.  Now, not all of the wilderness is rocky, there are dried up riverbeds, Arroyos that occasionally carry enough water to allow plants to survive and it was one of those areas that gave me the little green leaves.  Like I found in Fuerteventura there are lots of shells here, embedded in the soft dry clay and the lowering light brought out their textures.  At last, I found myself a dragonfly.  Apart from the unlucky pair laying eggs in a swimming pool, this was the first dragon I’d seen.  It was very delicate and thin, not like the big bruisers we get in Scotland.  However, the light was getting poor and I grabbed a couple of shots and then headed back to the hotel.

It was a Rock Show in the theater and it wasn’t quite dire, but it wasn’t all that good either.  There was a lot of shouting, enthusiastic applause and whistling coming from about four folk at the back of the audience, quite near us.  It was totally unwarranted and I have to admit, I think they were ‘Rent-a-mob’, bought in to encourage some interest in the miming and aping on stage.

That was it, apart from a G&T on the balcony to finish the bottle and the initial packing.  Another holiday draws to a close.