Started early drawing an apple. Tomorrow I will eat it to prevent any more time being wasted on it.

It wasn’t the best drawing day. I blame Scamp for talking me into having toast for breakfast because we forgot to get milk yesterday. I had volunteered to go and get some this morning, but she said she’d prefer toast and I thought “Why not!” I think that simple act unsettled me for the rest of the day. No toast for breakfast tomorrow.

I decided that I’d get the drawing done early and that would leave the rest of the day free to do as I pleased (once I’d got a PoD). I struggled with that simple task of drawing an apple. I tried it in one pose, I tried it in another. I tried the red side uppermost and the green side uppermost and nothing I did would allow me to create a decent looking apple on paper. The nearest I got was a sketch of an apple in pen on a scrappy bit of paper, but even that had distorted proportions. Eventually I gave up and went for a drive. At least I got today’s PoD. It was taken down beside the Forth & Clyde canal from under the bridge that carries the M80. I liked the letterbox format and the HDR colours. You don’t need to know what HDR is, believe me.

Came home and arrived just as the tea was being served, so I poured myself a cup of coffee instead and took it upstairs to start fresh, except inspiration wouldn’t come. I realise now I had the subject in my hand when I went upstairs. A cup of coffee and two biscuits that would have settled my drawing and it would also have removed that bloody apple from my mind. I started the apple again, this time using gouache which is watercolour paint that feels like oils. It didn’t work. I was just unsettled.

Once Gems had gone I suggested we go in early to salsa. At least that would give me something new to think about. We enjoyed both classes and the moves for the big boys and girls were Setenta Nueve, Desperado, Mariposa, Topo and Zorro. Quite a lot, but only Desperado was relatively new, being an old, old one reprised. 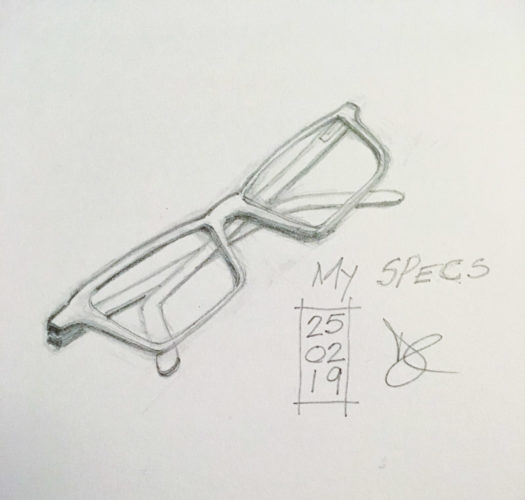 Came home, turned my back on that apple and instead I drew my specs. Sort of a last resort drawing, and even they wouldn’t play. The lenses kept moving and the legs manage to twist themselves into the wrong shape. However, they have been submitted on time and we’ll let that be an end of it.

Tomorrow we’re off to see a wean in Sandford and maybe get some foties taken around that village.  We have been promised cake!