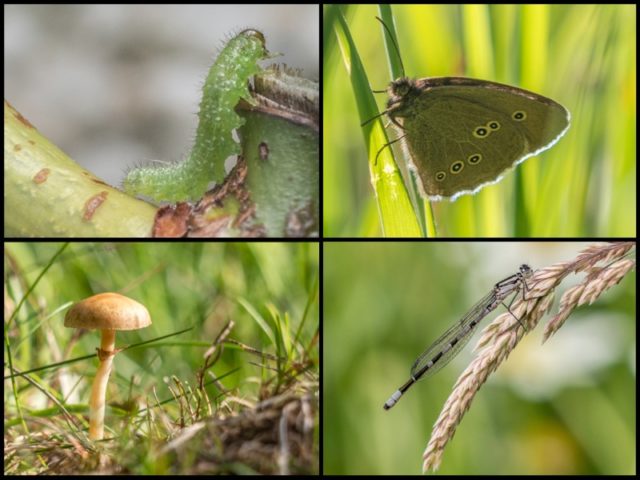 The Megane was due in at the garage for 8am, so it was another early rise, this time for both of us.  Got it down there on the dot at 8am.  Back for breakfast then just after that, decided to set the garden back the way it was before the fence went up.  Almost the way it was.  Scamp wanted the compost bin put in a new position, so clearing a space for it and levelling it was the first order of the day.  With that sorted, we could procede to refill it from the six black bin bags we’d filled with the compost.  Then plants in their pots had to be relocated round the periphery of the garden.  Some trimming next.  Two branches of the Rowan Tree were encroaching in the neighbour’s garden, so I lopped them off.  Dead headed the Schoolgirl rose at the front and that’s where I found the caterpillar.  It ended up in the front grass to fend for itself.

Just before lunch, the garage phoned to say that the Megane was ready and for once the bill was slightly smaller than we had estimated.  Every little helps.  Picked up the car and came home for a well earned lunch.  After that, I drove us in the Megane with its new CV joint boot to Bishopbriggs to get a lightweight Manfrotto tripod I fancied.  It will probably be a ‘car tripod’ as the big Manfrotto is a bit of a tight squeeze in the boot.  It really is a neat little thing and is much less cumbersome than the big 055CL.  However, I will keep the 055 to hold the D7000 because it feels much more secure on the big Tri.

Went for a walk over St Mo’s and got the shot of the damselfly.  The Pana lens wouldn’t focus on the damsel because it found the daisies in the background more attractive, so I used manual focus and focus peaking on the ’10 to get accurate focus on the insect and it worked perfectly.  The butterfly is a Ringlet and this is the first time I can recall seeing this name.

One wee sad thing today, but a happy thing too.  Val wanted a DSLR.  He’d been given one by one of his friends, but that person asked for it back.  He’s been looking for a cheap second hand one for a while with no success.  I had a D70 that’s been redundant since I got the D7000, so I stuck on the Nikkor 70-200mm and gave them to him.  I think he liked them.  I hope he enjoys using them as much as I did.  A wee bit sad for me parting with them, because they’ve both been great tools for me, but hopefully a happy day for Val, who’s going through a bad patch just now.

More problems uploading to Flickr tonight.  That’s the second time this week.  I finally got the images uploaded, but I think I may be looking for a new repository for my images soon, along with a few other people according to the forums on the net.

It’s not been a bad day at all weatherwise.  A little rain in the morning, but lots of blue skies and a lovely sunset tonight.  Let’s hope for more of the same tomorrow.