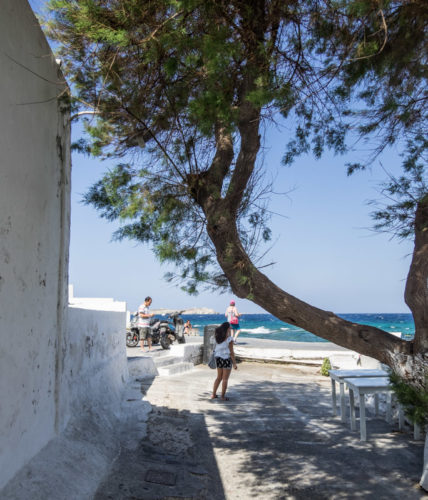 Woke to find we were on the port side although we were on starboard last night. Curious!

When we looked out we were next to the dockside and looking out over a pretty little marina to the rocky and scrub covered hills behind with lots of little white houses dotted all over the place. A bit like Skye without the rain. When we walked down the gangway we were met by a long queue for the free shuttle bus to town. I made the corporate decision to go on the water bus to town instead. Paid our €4 and got on the little boat which was nearly full. A bit choppy going out past the harbour and a wee bit ‘rocky boats’ (Technospeak). Got to the tiny little harbour and walked out to more white painted houses. Some with blue doors and window shutters and a church with a blue domed roof. Very pretty. Very picturesque.

We wandered round the twisty turny streets of Mykonos and I found hundreds of photo opportunities at every corner. Finally reaching the three windmills that seem to be the icon for Mykonos. The little narrow cobbled streets are full of tourist shops. Most of them displaying no price tags. That’s a sure sign that the items are expensive. “If you need to know the price, you can’t afford it.” Up near the windmills there is a car park. Some of them have been there a long time, judging by the thickness of the dust on them and by the dates of comments and signatures on them. I added mine too! Just over the hill from the windmills is a little white walled church. More photos taken.

We stopped for a drink at a cafe near the windmills and I had another Cafe Freddo, not as good as the first, but that’s usually the way. After that we made our way back through the labyrinth and just missed the boat back to the ship. Sat in the sun and the strong wind and caught the next one. The sail back to the ship was more rocky and rolly than it had been going because we were sailing into the wind. The boat was rolling side to side and pitching forward and back at the same time. Interesting!

Back in plenty of time. Time to do a small painting. I wasn’t all that happy with it, but the Posca white brush pen worked well for placing the white houses on the hillside! Watched the mobs of travellers coming and going from the ferry port along the dock from us.

We should have been sailing at 4.30pm, but ever more frantic messages, firstly over the ship’s tannoy and finally into the cabins calling for two passengers, Jean and Derek Hart, to make themselves known to the reception told us that we wouldn’t likely be making that cut-off. Two large suitcases were unloaded from the forward gangway and dumped on the quayside. As the clock ticked around to 5.30, the dock gates were locked and it looked like we would be sailing without the Harts. Just when it seemed they’d given up hope of finding them, two folk ambled down the road to the locked gates and looked up at the crowds standing at the ship’s rail and on balconies. A great cheer, or should that be ‘jeer’ went up and the gates were unlocked which allowed the Harts to do the walk of shame, grab their cases and get back on board. I imagine Cap’n Bob would have met them at the top of the gangway with “Wait outside my room NOW!”

At 11.15pm I went up on deck with a crowd of others for an open air talk by an astronomer bloke. It was utterly fascinating as he pointed out constellations with a laser pointer. Saw the Milky Way, The Plough and loads of other stuff. Like I say, utterly fascinating.

It should be Rhodes tomorrow.