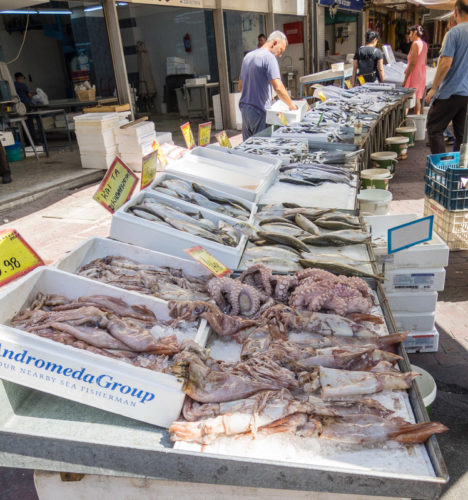 Yes, you read that right, scottish with a small ’s’.

If you are a long term reader of this blog, you will already know about americans and english, unfortunately we met some scots today. Not real Scots of course. We think they might have come from Embra. But first, the rest of the day.

Woke to find the ship was being re-fuelled from a tanker boat. Took some photos and went to breakfast. Full Scottish breakfast because I’m on holiday. Then we were off to investigate Piraeus.

First we got lost because that’s what you do in a new destination, then formed a plan of sorts. We’d already agreed that we weren’t going to Athens to see the Parthenon or the Acropolis. We weren’t even going on the open topped Red Bus, because the predicted temperature was 40ºc which is just stupid-hot for us cold climate folk. We were going to head off hoping to find something interesting, get lost then make a plan. The ‘something interesting’ I found was a motorbike shop with partly eviscerated old bikes outside. Virtually everything but the frames had been stripped out. It looked like the place that motorbikes come to die. I took lots of photos and then we got to the planning.

Just in case we did get seriously lost, there was always the iPhone to rely on, but where’s the fun in that? The plan was to walk along the side of the bay, keeping the water on our left side and see what we could find. We walked for a good couple of miles and found chapels with ornate interiors, statues to apparently famous people and a shop that sold ‘chibs’, no spellchecker, not ‘Chips’, but ‘Chibs’. Seriously life threatening pieces of sharp looking metal. Everything from pen knives to Japanese Samurai swords with machetes and throwing knives in between. Crossbows, reflex bows and pistols. Try getting them through security!

Further on we had to stop, because we’d lost the sea. It was nowhere to be found, so check with the iPhone. Apple Maps had the answer and we found a way to go back that didn’t involve simply following our trail of breadcrumbs. Our route took us through a market that seemed to have a lot in common with ‘The Barras’. Loads of meat being sold from chiller cabinets. Fish in glass topped freezers and fish on slabs with the stallholders shouting that they had fresher fish than their neighbours. Loads of fruit and veg, plus, of course the usual toys and odds & ends that the sell in ’The Barras’.  Today’s PoD came from the fish market.

Stopped at a coffee shop where Scamp had a Cappuccino and I had a Frozen Cappuccino. What a taste. I had to wait ages for it because the first one the Barista made apparently wasn’t good enough and got thrown out. It was worth the wait. I’m now a convert to Cafe Freddo. At least in the summer. Bought myself a little espresso cup. Cost €2. After a while we found that we were back on the street we started from and the sea was back on our right hand side.

Went to the pool at the stern of the ship. It’s an adult pool and it’s tiny, but there are two whirlpool jacuzzis next to it. Lay and baked in the sun drinking Mojitos and thinking “This is the life”.

We went to dinner at night and were placed at a table with four of the most obnoxious individuals we’ve ever sat with. They started off by simply ignoring us, then in a condescending way they told us that they were all related (Inbred, I think is the proper term) and they apologised for leaving us out of their conversation. The ‘lady’ next to me had such a loud Morningside accent and such an enormous ‘bool in her mooth’, it was difficult to understand her. Then I realised that her slow precise speech was because she was absolutely ‘Rat-Arsed (that’s a condition about fifty stages on from ‘Three Sheets to the Wind’).  She thought she was so refined, but the smell of alcohol and smell of stale fags told the real truth. Some people should be made to wear warning signs.

We left them to their sibling ramblings and left before coffee to watch three boys crucifying pop songs. Scamp liked the songs, I didn’t

Oh yes and one last thing. There’s a bell tower in Piraeus that plays “Never on a Sunday” on the hour, every hour!  I’m sure you feel better for knowing that.