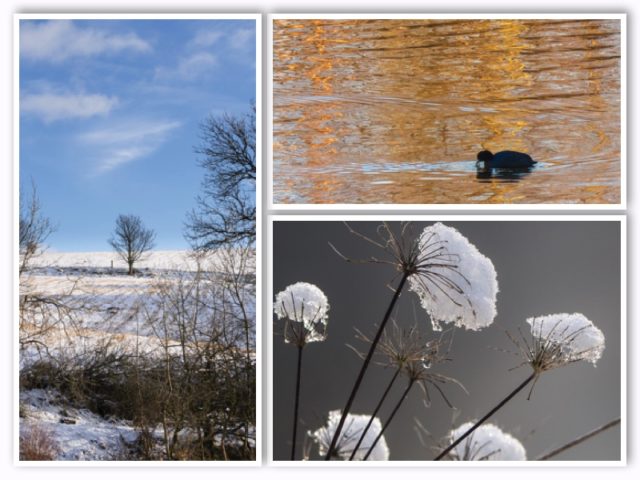 Woke up to a suspiciously white light coming through the curtains. It might have been sunshine, but it was more likely sunlight reflecting from lots of snow.

A cursory glance out the window confirmed that the snow lorry had indeed parked outside our house and deposited its load of snow. Went back and read for a while. Read the disappointing end to the Peter May book. It almost felt like he had got fed up writing the story and decided to tie everything up in the last five pages. Don’t you just hate books like that. I do.

A cup of coffee after my shower cheered me up and gave me the strength to face the day. I had intended to go to the gym today, but instead, decided to get my sketch done early. Today’s drawing, and it was going to be a drawing today, no paint was going to be spilt, was of Scamp’s poinsettia which she has been carefully tending for over a month now and although it’s a bit spidery now, it’s still holding some of its leaves. The secret appears to be to feed it warm water daily in a dish that the plant pot stands in. I presume that creates a moist atmosphere around the leaves and that’s what the plant needs. With the open, almost skeletal frame of a plant like this, a negative space technique seemed right. That is, instead of drawing the plant, you draw the open spaces it occupies; the spaces between the leaves and the spaces between the stems. After that’s done you can decide what part goes in front of or behind other parts. It seemed to work. It’s amazing how absorbing this technique is. I suppose it’s what makes adult colouring books so interesting, although I can’t really see that myself. 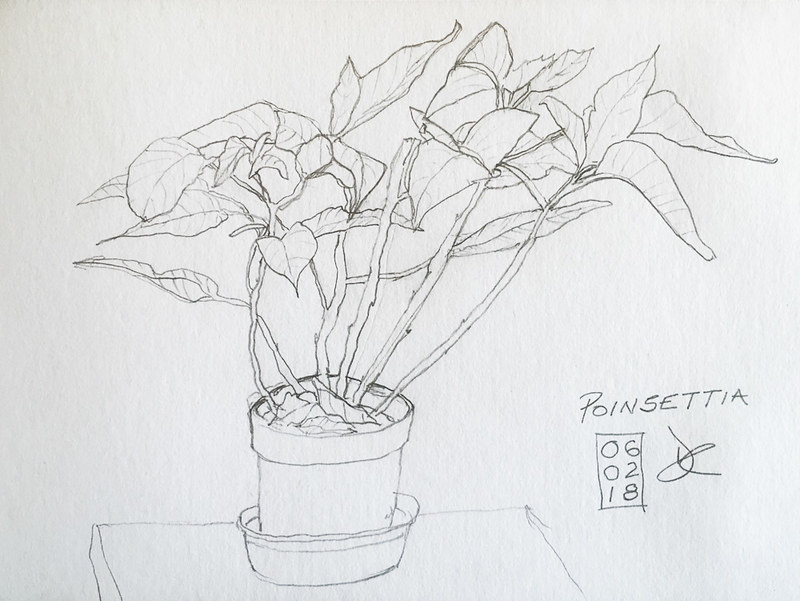 While I was working on this a parcel dropped through the letterbox. A slim cardboard rectangle contained a book ‘True Story” by Jo Levy, a friend we met at salsa class, many years ago. Scamp had ordered it as an anniversary present for me. It’s a lovely wee thing. 31 drawings done by Jo, one a day, during the month of May 2017. She’s agreed to sign it, that will make it even better. Brilliant idea Jo and even more brilliant idea for a present, Scamp. I will treasure it.

After I completed the drawing which, although technically correct, wasn’t a patch on Jo’s cartoon drawings, I drove down to Auchinstarry and went for a walk along the canal and back along the railway. Cold and icy in places, but very enjoyable. Some days, like yesterday, you get one or maybe photos. Today I took 48, whittled them down to 18 and further reduced that to 6 of which only three were posted. This is part of the new plan. Yellow spots for ones worth considering and green spots for ‘record shots’. The some of the yellow spots become red spots because they’re going on Flickr. Once on Flickr, some more are lost because they look good on full screen, but don’t look so good as smaller resolution files on Flickr. Only one of the final selection becomes PoD and today’s shot that wins the acolade is the snow on the cow parsley heads.