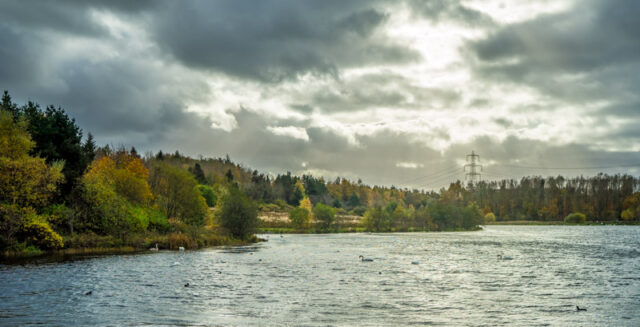 Early in the morning, too early for us to know about it, the clocks silently went back an hour. Summer’s gone and winter’s in the meadow.

Because we’d had an extra hour in sleep, we took the lazy approach to the day. So lazy that we did hardly anything. The furthest we went was a walk down to Broadwood Loch after lunch. We continued down to Blackwood and up past the stadium. Dropped in at the shops for essentials, milk, a bag of mixed veg, a packet of sticky buns, a box of Turkish delight (mine) and a bag of chocolate raisins. Essentials, like I said. By the time we were heading home it seemed to be growing dark and it was feeling a bit cold in the strong west wind, even with my big ‘Bergy’ jacket on.  Connolly was right. “Nights are fair drawing in.”

Spent an hour afterwards playing a brilliant new time waster I’ve found, called Numbers Game. Deceptively simple concept but totally engrossing. Lost a couple of hours already to it. After dragging myself away I worked on PoD which is a view across Broadwood Loch. This isn’t the photo that came out of the camera, it’s the view from my mind’s eye. I know it’s a bit fake, but I like the lighting.

Topic for sketching today was “Buddy”. I’d roughed out a face on portrait of Buddy Holly that looked ok. Today I inked it in and it looked, not quite as good as the rough pencil sketch, but Scamp said it was a decent likeness and that’s good 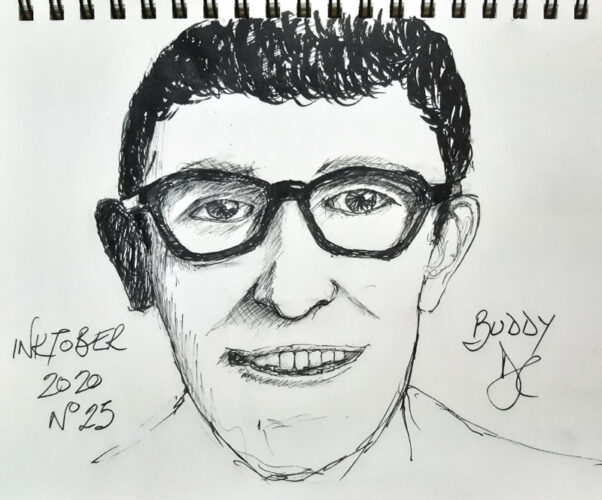 Watched a boring first competitive episode of Strictly. Well, actually I watched half an episode before giving up and posting the photos for today. It really was that riveting.

Spoke to JIC and heard about chlorine in a hot tub and rodent saboteurs. Not both together. The mice weren’t in the hot tub, just in case you were wondering.

Tomorrow Scamp’s car goes for MOT, so it’s an early rise to drive down and either walk back (if it’s dry) or drive back in the more likely event that it’s raining. Then we have to wait for the phone call.