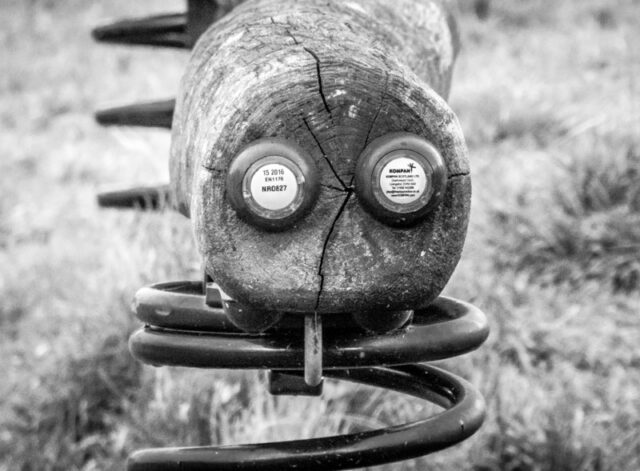 A lazy start to the day, but nobody was going far today. Not one car moved from our parking area before midday.

I drove up to Tesco to get some fish and a few odds and ends for tonight’s dinner. I thought of taking a detour to St Mo’s, but part of the odds and ends was a box of ice cream and it would surely have melted or be in the process of melting by the hour or so I’d allowed myself. Besides, I wanted to try out the Sigma 105mm macro lens on the little toadstool I’d found yesterday. That lens was in the house, so I drove home. A few people had ventured out in their cars by the time I got back. I think we must live on the lazy side of the estate.

Walked back to St Mo’s carrying the macro lens. It was remarkably easy to manually focus the Sigma once you take your time and get the right buttons pressed. I found a little daisy closing up for the night as well as the toadstool. I’ve never seen daisies flowering so late in the year. No Santa watchers today!

It had been dry almost all day, cloudy but dry. I’d only been out about 45 minutes and the rain came on. The light had disappeared by that time anyway, so I headed home. I stopped at the Adventure Playground on the way to take a closer look at one of the bouncy toys. It looks like a wooden caterpillar with big bug eyes. I think they are just the advertisements for the company who made the attractions. I’d seen it many times and tried a shot with the Sony, but it didn’t work out the way I’d planned. Instead I used the old TZ70, the Teazer I’d brought with me today. I’m intending to use it until I get the TZ90, its replacement, hoovered out to remove the dust in the lens and probably on the sensor too. It looked fine. Later after I’d had a good look and a quick cull of the useless shots, I decided the Teazer shot would be PoD.

Tonight’s dinner was Simple Fish Stew. It was quite a favourite in the house for years, but it’s months since I made it. Tonight it tasted even better than I remember it.

Scamp is off to have coffee with Shona tomorrow. I might go or I might stay and fix the TZ90 and do some more work on the calendar.