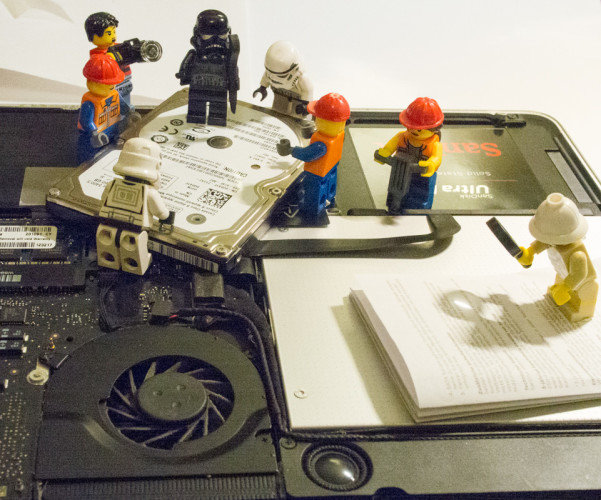 Scamp was out with her sister this morning which gave me the opportunity to complete the first and most difficult part of the procedure to replace the hard disk in my MacBook Pro with a solid state drive. Sounds so simple, but like all these things, it gets more and more complicated the deeper you research it. Over the last few months I’ve read many and varied descriptions of how to achieve it. I’ve watched many videos too, some very good and some downright terrible. I’ve added memory to the MBP and upgraded the hard disk too over the years, but this was much more difficult and invasive. So, this morning I was removing the DVD drive and the HDD. I’d already bought the caddy that would hold the HDD and fit into the space left when the DVD drive was removed. There is just so little space in the MBP, no room for a second HDD, so something had to go. I don’t use the DVD very much so I won’t miss it much.
Technophobes can ignore the next page and a bit as it will only give you nightmares.  Just scroll down and read the bottom bit.

I chose to do the minimum amount of disconnecting of mylar connectors as these are so fragile. Ok, deep breath, cup of strong coffee and in we go:

Went to Currys – PC World at Bishopbriggs where, according to their website they had the drive in stock. When we got there, there were loads of Currys personnel walking around looking busy, and all carrying bits of paper. I asked one of them if they had Sandisk SSDs and he took me to the stand for SDs. No, SSDs Solid State Drives. Oh yes, they’re down here, but they didn’t have them. I told him the web site said they had them in stock. Oh, we keep them in the warehouse. You have to order them online and pick them up here. No, sorry, I’ll go elsewhere. I didn’t go far, I just went to the checkout. Have you got a Sandisk SSD? What size? 240Gb I replied. Yes, just a minute. Just about a minute later, he arrived with the SSD. He must have run down to the warehouse got the drive and ran all the way back. He wasn’t even out of breath!  A cup of watery Costa coffee, then back to attempt part 2.

Well, that’s the story. Really what I did was based on a book Hazy encouraged me to read, The Long Way To A Small Angry Planet. In it they have tiny little droids that they inject into the system in the spaceship where they autonomously repair and upgrade the system. That’s what I did here. I just let the Weemen read the webpage. Showed The Professor the instruction sheet from the SSD. I even asked Dennis to record the whole thing so I could pass it off as my own work They they did the rest. Simple!

You thought I’d done all that myself? Aye Right!