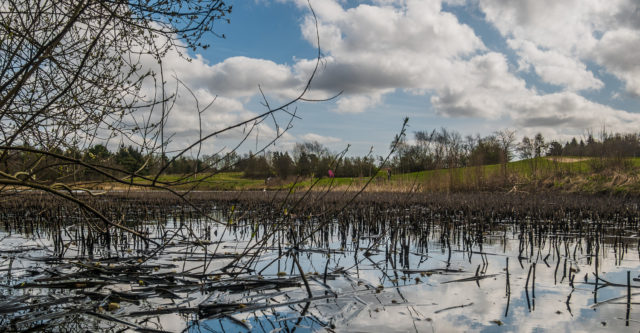 We ventured out today, just for exercise. On purpose we didn’t go to the beach or to our second home in Fife.

We didn’t go out to the beach or Fife, but just in case there was somebody somewhere listening in to our conversation, Scamp sneakily said we could walk over to Condorrat (where there are shops that sell essential foodstuffs). That way, the powers that be, the police, the government and MI6 wouldn’t suspect that we were going to St Mo’s. It was a clever ruse, and it had me fooled too. I thought we were going to the butchers to get a nice juicy steak for dinner, but instead of turning right at the end of the path past the (now locked) swing park, we turned left, crossed the road and walked through St Mo’s. The diversion might have had me fooled, but the invisible trackers, that are now being designed to be injected into our bodies secretly in the anti-virus when its made, wouldn’t have been fooled by the change of direction. They would have reported back and sent a fleet of drones to pinpoint our location for a squad car of armed police to detain us under their new emergency powers. At least, that’s what I read on the InterWeb last night.

Anyway, in the real world, we went for a walk in St Mo’s. It was fairly quiet with no cars in the car park and only a handful of people walking around in the sunshine taking in all the vitamin D that was available. There wasn’t much to see, but I did take another low down landscape for St Mo’s from the far side of the pond. I’d say that it was the best of the photos I took today, but it was really one of only two photo that survived the cull when I got them into the ‘puter back home. The main reason I didn’t take any more was that the battery indicator on the camera was flashing red, warning me no doubt that it was about to shut down. I’ve never seen it flash red before and the camera did take about three hours to replenish the battery from my fastest fast charger, so it must have been pretty empty.

Back home I managed to repair the pocket on a pair of jeans. I hate throwing out a perfectly good pair of jeans, just because the pockets are worn through, not with cash I hasten to add, but with my keys. Making the repair pocket isn’t a problem, it’s the topology of pockets that gives me a headache. It’s like working with a cloth Klein Bottle, where the inside becomes the outside and vice versa, plus you have to work out how to get the bloody thing into a position that allows the sewing machine needle to do its work. Finally after three dummy runs, with me as senior dummy, I botched it together. It’s not the finest piece of sewing I’ve done, but I think I’ve saved another pair of jeans from the bin. Now I’ve just found another pair in need of a new pocket. I’ll possibly leave that until next week when my head has stopped hurting.

According to government sources tonight, Boris is in good spirits and is stable. It didn’t mention exactly what the spirits were and if it was overindulging in them that had led to the initial instability. We wish him well. Better the devil you know …

Tomorrow is the big day. The weather doesn’t look great, but I think we may go looking for a park bench, quietly.