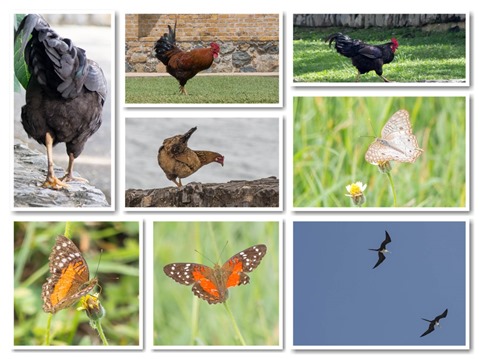 This will be a rushed post.  It’s been a long day and we’ve crammed a lot into it, although it might not seem so with this compressed or condensed description.

The day started well and we left the apartment with the intention of visiting Scarborough and then heading to a beach, but that’s not how it turned out.  Firstly we made a stop at the Magdalena Grand Hotel to see how the other half live.  The hotel, which is quite grand and quite magnificent is surrounded by a golf course which has the usual water hazards.  However, the water hazards on most golf courses don’t have warning signs saying ‘This lake contains caimans’.  Thankfully we didn’t stop near the water.  We did continue on to see the hotel and to walk the grounds as if we were staying there.  It’s a technique I must learn some time.  We were both impressed with the size and look of the building, but there weren’t very may folk staying there, so we did wonder how profitable it was.  While we were there I got my first decent shots of Frigatebirds.

As we were leaving the weather seemed to take a turn for the worse with squally rain appearing.  It had been threatening while we were trespassing on the hotel grounds, but now it was doing more than threatening.  We carried on to Scarborough, and it did remind me of the English seaside town with the steep hills around it.  Madeleine drove us to Fort King George and old stronghold, now open as a museum.  Loads of interesting stuff to be seen and most of it was open to the public.  That’s where we saw the cockerels and the hens.  They seemed to have the run of the place.  Jaime bought us some Tamarind Balls which are made from Tamarind paste with added pepper made into balls then covered in sugar.  A strange sweet/sour/salty taste.  Hard to define.  Great place to visit.  It was there too we found all these lovely butterflies.  Butterflies in January?  Who would have thought it?  Aha, but this isn’t Scotland.

By the time we were leaving here the rain had started for real.  No longer  squally, but a proper downpour.  After an attempt to outrun it, we gave up and headed with our sandwiches and juice back to the apartment where we had a picnic on the balcony.  Not quite what we’d intended, but at least we were dry for a time.  Then the rain started again and we took shelter inside.  These showers continued all afternoon.  I got fed up after a while and went out to walk along the beach.  Unfortunately, the beach had disappeared under the heavy breakers of high tide, so I sat down and sketched a concrete seat as a possible subject.  It rained again and I had to give up.  At that point Jaime appeared wondering where I’d got to.  We walked back and he showed me the fruits on one of the trees in the hotel grounds.  I must remember to ask him what it was called.  Before we got ready to go out to the restaurant Scamp wanted to dip her feet in one of the hot tubs.  We sat in it for about half an hour while the rain made little soldiers on the surface of the water around us.  What a strange feeling that was.  When we finally gave up the hot tub, we went for a swim in the pool.  The water was remarkably warm.

After our swim we went back to the room and Scamp went to shower and wash her hair.  I grabbed my sketchbook and drew the view from the balcony.  It’s not technically perfect, but it’s a better, and more interesting, drawing than the concrete seat.  IMO. 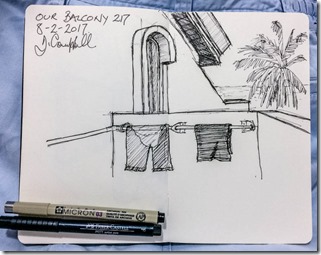 Dinner was in Karawak restaurant and it was fabulous.  Callaloo soup followed by Tomato, Basil and Olive salad then a main of steak or shrimp with rice, pumpkin and a sort of ratatouille served in a hollowed out half aubergine.  Dessert was coconut cream cake with ice cream, sorbet or ice cream.  It’s hard not to compare that with what we had on our first night here at the steak and lobster grill and it’s hard to see now how the S&L Grill survives against competition like this.  The waitress worked the table with a great sense of humour that you couldn’t help but appreciate.  The only fly in the ointment was the owner or manager, it wasn’t clear which, who only seemed to be interested in her regular customers and only gave us a cursory glance.  She needs to take a lesson from our waitress.  Nobody it that high and mighty that they don’t need to cultivate new custom.

Well, that was meant to be a condensed description of the day.  I missed out the Karaoke because it was so bad, it wasn’t even funny, and no we didn’t take part.