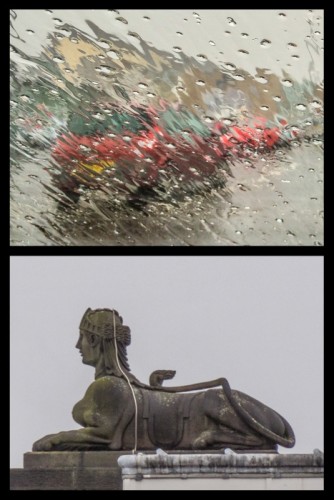 This blog starts with us sitting in a nice wee French restaurant in Embra next to a loud american who must be important – to himself at least. He rambled on about the wonderful food in this, his favourite restaurant. When his companion asked if the French onion soup was served with cheese he replied after a pause “It’s served the way it is in France.” (fancy that eh? In a French restaurant, now that’s a surprise). “I don’t know” would have been more honest, but then again he was american. Our soup, Scamp’s salmon and my pork chop were really excellent, especially after Wednesday’s disappointment at Browns. We will be back to Petit Paris in the Grassmarket.

On the train home we were stuck in a carriage with the six morons and their smartphones from the title. Three of them were discussing the merits of Twi’ur (sic!). One of them was explaining that she had a created the Genyus Bar (sic again! Although most of the carriage were sick by this time.) and emphasized her spelling of it. She then went on to create an on-line personna for one of them who then found that he had two followers. After that, there was no stopping them. They were hashtagging this and re-tweeting that. Then one of them got her jacket down from the rack. She had an EIS badge on it. Educational Institute of Scotland union. Teachers. Loud, opinionated and terminally stupid. I can say that now, I’m not a teacher anymore. I discovered the error of my ways and got out early. When we got off the train I pitied those left behind with the morons away from their lessons.

In between paragraph one and two, we just wandered down the Royal Mile then down The Bridges, through JL and then headed for the train.

Before paragraph one (are you still following me or do you need a map?) we got some tea in a new-to-us shop just off the Grassmarket as my usual tea shop was SHUT. Not closed, but SHUT. A very Scottish expression I always think. Maybe next time he’ll be open and we can discuss the world, its problems and ways to fix it.

Only the sphinx with the surprised expression came from today. The abstract was from Tesco carpark in a hailstorm yesterday (other supermarket carparks are available).