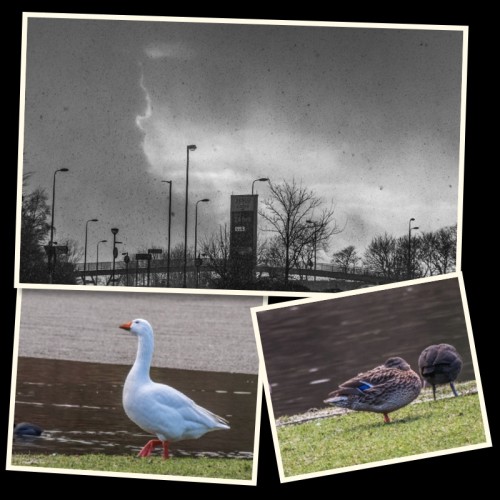 We’ve had just about everything flung at us today. Woke to a light covering of snow and temperature of 0.6ºc. Soon after that the snow melted and the rain started. No wind thankfully, for a change. Went to the gym and had a quick swim. I went on the VR bike to start with and cycled on Elba. I now know how Napoleon felt. What a place to be stuck on. Every hill seemed to be about 1:4 and it was constant uphill after uphill. I kept wondering if there was a button on the bike that would let me have a 360 degree view, like Google Street View. I’m sure somebody will be burning the midnight oil somewhere inventing it. If not, then they should be! I was totally knackered after that and did some easy treadmill stuff and some arm exercises because my legs felt like jelly. The worst thing is, that was level 1. Heaven knows what level 4 is like. I don’t think I’m ever going to find out.

When we came out it was still raining, but the sun was shining too, a common occurance in Scotland. It’s what we call “Summer”. This wasn’t summer though. The wind would have cut through you. After lunch I made a Thai Green Curry paste and watched the sleet battering against the window. I kept waiting for a break in the weather to let me get out and get some foties, but every time it looked promising, five minutes later something wet was falling from the sky again.

I eventually gave up and went out in the car to Tesco. The black clouds in the west looked ominous but the sun in the east looked promising. By the time I got to Tesco, hail was drumming on the roof of the car. I decided to sit in the warm and the dry and wait it out. I waited and waited and then there was a respite from the hail and I got to the shop nearly dry. When I came out, it was snowing – large fluffy flakes of the stuff and underfoot was treacherous with slush. Drove home and by the time I got back the snow was off and the sun had come out again. Went down to Broadwood Loch and got some photos of the ducks and geese.

Four seasons in one day? Oh no, we get much, much more than that in Scotland.

By the way, the Thai Green Curry was very nice. Needs a bit of tweaking, but then doesn’t everything?