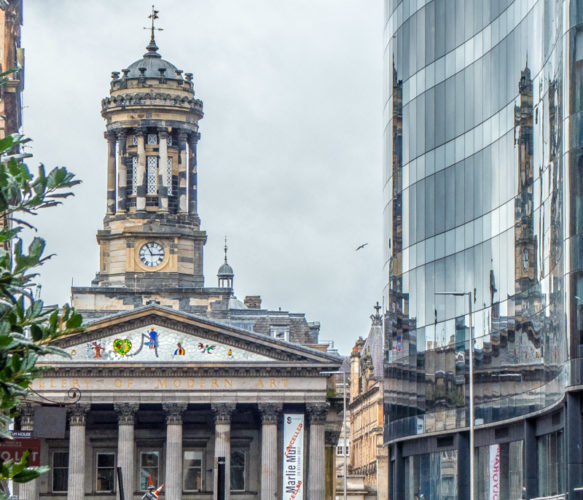 It was raining when we woke. Not heavy rain, just fitful little showers, like a petulant child who doesn’t want to be ignored, but has nothing to say.

After the inevitable checking of FB and Flickr, and of course a cup of strong coffee, it was time to get the bus into Glasgow. A journey that would have taken 15 minutes in the car took almost an hour. 15 miles in an hour. It’s not difficult to work out the average speed. What was worse was that this was an almost brand new bus which, like modern cars has the engine cut out whenever the gearbox is in neutral and the wheels have stopped. That’s ok(ish) in a car, but is a total pain in the arse in a bus. I’d estimate that in an unlucky car being caught at all the traffic light and roundabouts, taking the same route, the engine would stop less than 10 times. The bus must have stopped easily 30 times and each time the engine cut out. Like I said earlier, I can almost see the point of the engine switching off in a car in the city, but the inevitable wear and tear on the engine and especially the starter motor by the constant stopping and starting must offset any fuel saving or air pollution advantages. 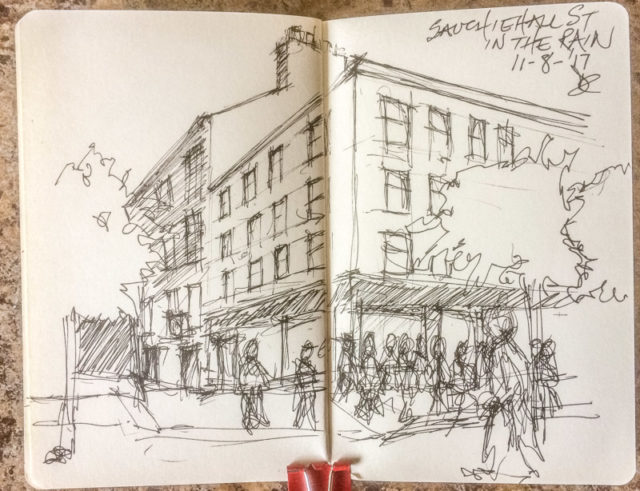 Visited Nero for a coffee and a chance to sketch the grey masses walking, head down, along Sausage Roll Street.  First decent sketch since we returned from the cruise.  Pleased with it.  The wee A6 sketchbook fits neatly in the pocket of my blue rainy coat, so it’s always there.  I’ve got Fred to thank for that idea.

I wanted to see the Lost Glasgow exhibition run by Glasgow City Heritage Trust
in Bell Street. It originated from a FaceBook page. Although there were some interesting photos, I couldn’t say I found it all that interesting. What I did like was the fact that the photos were mounted on foam board with a short description on the back. The photos themselves were stacked on shelves around the display space and this allowed easy access and the ability to pick them up and examine them close up. They even had magnifying glasses placed around the room to allow even more investigation of places and faces. I’d have liked to have seen more photos, always more photos. That’s what this FB page is famous for. Outside in Brunswick Street the JCBs were creating another Lost Glasgow entry by demolishing more old buildings.

Lunch in Paesano was a salad for Scamp and a pizza for me. After that, some light shopping and few foties, then the slow bus back home. My PoD was the shot of the GOMA. I felt sorry for Marlie Mul having her exhibition cancelled, then I read the full story here.

The weather started off wet in the morning, dried up in the early afternoon, rained a bit more in the late afternoon and then dried up again. Scattered showers, that kind of summed it up. Tomorrow might be a bit better according to the weather fairies.