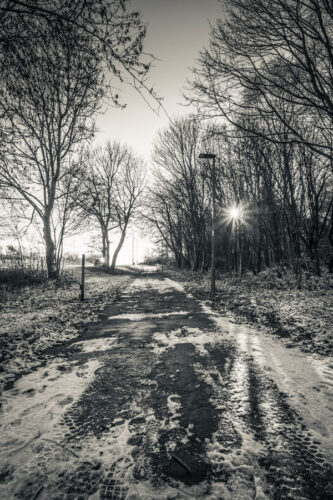 Today we woke to snow, just as the forecasters predicted … for once.

Yes, a layer of the white stuff coated the paths and the grass this morning. The temperature was 1.1ºc. Above zero, but only just. I was thinking that I might go out and get some snowy scene photos, but then again, there was no real need to rush. The snow would probably be there in an hour or so too. Time to finish the chapter in my book.

I eventually pulled on my boots, got my heavy Bergy jacket and my furry hat. Then, armed with both Sony cameras I went off to the snowy wastes of St Mo’s. I did get PoD with the A7, but most of the photos were macros taken with the A6000. Surprisingly, when I got them processed, I had far more ‘keepers’ than I thought I’d have.

Back home, my next task was to decant some of yesterday’s leaves into the compost bin. The easiest way, and much to Scamp’s dismay, was to bring the garden waste wheelie bin through the house to the back garden. Then shovel the leaves into the bin. The contents of the bin were in far better nick than I’d have expected. There was a lot of good looking, well rotted compost in there and also a fair number of worms eating their way through what was left of some vegetable matter. The already chopped up leaves will give them something new in their diet.

Our own diet today was Tomato and Red Pepper soup followed by Pan Fried Chicken Breast with potatoes, broccoli and cauliflower. It sounds fancy, but I was cooking, so some corners were cut and some license has been taken with the description. The chicken was half the breast from the chicken I cooked yesterday. The broccoli and cauliflower were from an M&S packet and the potatoes were mingin’. Too old and mouldy looking. Still, pudding was an M&S Cherry Steamed Pudding. I could never have made that, but I could bake it in the microwave for 1min 30sec.

Spoke to Jamie and found out the full story of Simonne’s injured hand and the extent of the injuries. She’s back to the hospital tomorrow to get the dressing changed and check that healing is properly in progress. Neither dog seems to have any serious injuries.
Things seem to be moving on the house front too with some work already completed and others in the pipeline.

Today’s PoD is a view along the path to Condorrat with a tweak or two in Lightroom. Doesn’t it make it look cold!

Tomorrow we are intending to take Isobel to the tea dance in Falkirk. It’s a test too, to see if Scamp can manage to dance with the new glasses on. If it works we may attempt a class on Saturday. Temperature now is -1ºc. Below zero, but only just.