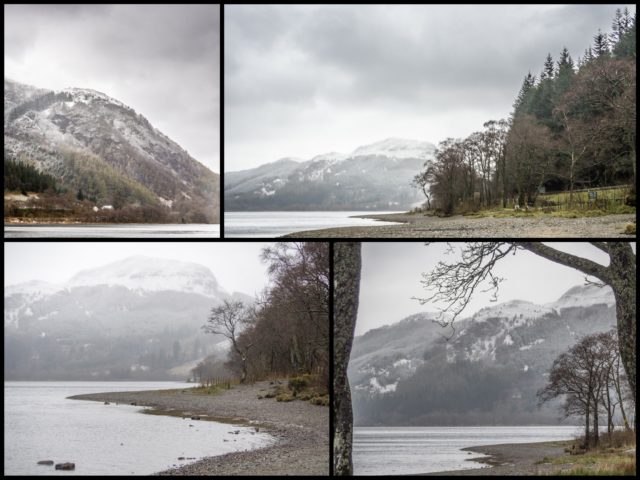 Today after a dodgy night with an upset stomach I was feeling a lot better.  The upset was mainly due to too many Terry’s chocolate orange slices, but I don’t think the couple of mouthfuls of sour beer helped.  Anyway, I made a decent attempt at finishing off the breakfast that was set down to me.  It had snowed during the night and the hills across the loch from the hotel looked as if they had been dusted with icing sugar.  Outside the window as we finished breakfast, it was obvious that the icing sugar was an illusion because big fat flakes of snow were falling on the garden.  Nothing else for it but to get going, and that’s what we did.  Packed the car and headed out past the big garage behind the hotel that held, not a car, but a large model railway layout.  We saw it yesterday and I had hoped to have a word with the designer as he tended to it, but today the door was firmly shut.  Good idea, because I don’t think snow and model railways mix very well.

We drove over the bridge, turned left at the roundabout and then under the same bridge, hoping for some photos of Castle Stalker and maybe Oban.  It wasn’t going to happen.  The snow just kept coming and on a twisty coast side I didn’t get much of a chance to watch the scenery.  Castle Stalker came and went without a photo being taken.  In fact, without us stopping.  The sea was choppy and with the driving snow the view wasn’t what I was looking for.  Maybe another day, a warm day with a nice sunset behind the castle, or at least, no snow.

When we got to Oban we had to navigate its maze-like one way system.  When we eventually got the hang of it, we couldn’t find a place to park which was within walking distance of the main street.  By this time the snow had turned to sleet, so we both agreed to come back another day.  A warm day waiting for the sunset behind the castle and definitely no snow – or sleet.  Am I expecting too much?

Off on the road to Crianlarich which was a logistical nightmare finding the correct route through that one way system again, but we managed it.  Sleet had turned back to snow and it was getting heavier.  I remembered bits of the road through the Pass of Brander and I remember my dad telling me that birds didn’t fly over it because of the number of hawks that nested there.  I was watching the windscreen wipers and noticed that they didn’t have that much work to do as the streamlining of the car eased the snowflakes over the windscreen rather than splatting them on to it.  I even turned the wipers off and it made very little difference.  I think the fact that the snow flakes were light and fluffy meant that they floated better and this helped the effect.  Still it’s an impressive demonstration of the streamlining of modern cars.

Met the main road at Tyndrum and drove down past Crianlarich and stopped for a while just to get a rest from driving.  From there it was a fairly easy run to Lubnaig as the snow was lessening.  Stopped at the parking place at Lubnaig and had coffee and a jam scone each.  That’s where today’s photos came from.

Stopped at Dobbies in Stirling for Scamp to get some pansies to decorate her pots in the garden and that was the end of the run south.  There were blue skies over Cumbernauld when we arrived home, but soon after hail battered down and then the snow started.  Hoping for a better day tomorrow.