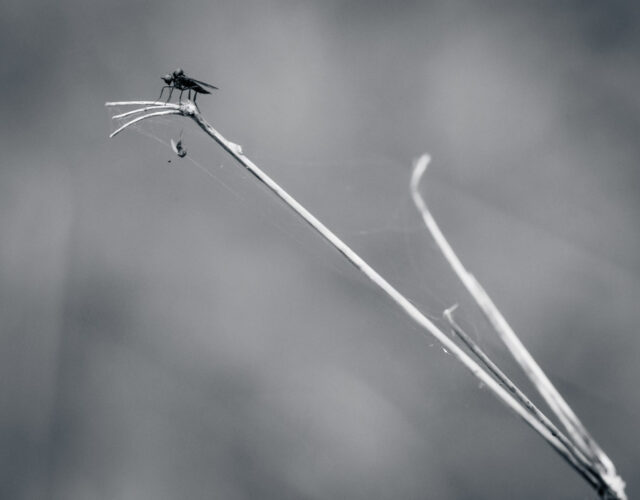 Nowhere to go and nothing to do. Milky white sky and nothing to entice a photog to go out and capture the world in all its majesty. The furthest we got was a walk to the shops for milk and bread, literally. We bought milk and bread … and a packet of Jammy Joes, just for fun. I didn’t even take the camera with me because I didn’t think I’d need it. I was right.

Later in the afternoon I went for a walk in St Mo’s and got today’s PoD of a little fly stuck in a spider web with another fly overseeing the prisoner. A bit sinister in black and white, but it suited the subject and the day I thought.

Even later in the afternoon I walked over to Condorrat to buy dinner: One special fish supper for me and a small fish supper for Scamp. It’s been ages since I’ve had a deep fried slice of fish done in breadcrumbs. Quite, quite delicious. A Friday treat if there is one.

On the way home I got another treat. I got to see a Friday tradition. A bloke with a burst lip got chucked out of Broden’s Bar which used to be The Masonic Bar in Condorrat. He was absolutely “rat arsed” and was shouting for somebody in the bar to come out and give him a square go. Swearing and performing a modern dance as he tried, with one arm in his jacket sleeve, to find a way of getting the other arm into the other sleeve. It’s nice to see that the old traditions aren’t dying out.

Oh, yes. One strange thing happened. I got the renewal notice for my car insurance in the post and it was LESS than I paid last year. I’ve checked it at least twice and Scamp has confirmed that it’s true. I’ll say this one more time IT’S LESS THAN LAST YEAR’S. Mind you, I’d done just over 5000 miles when the car went in for service at the start of the week!

The Spitfire flew over Westfield tonight and then disappeared into the setting sun. That’s the sun that appeared from behind the clouds about 6pm, just in time to set. I think it was having the day off.

Tomorrow we’re hoping the teachers will be able to explain where we’ve missed a step in the waltz, because we can’t find where it’s gone. It might be under the couch, I may go and look for it after I’ve posted this short blog.