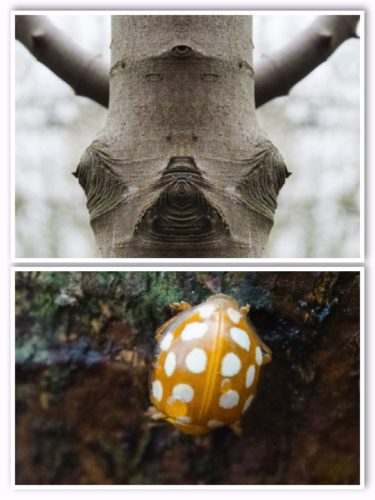 How do you make yogurt ice cream without yogurt?

You go out for a walk on New Year’s Day when Tesco is closed and try to find a shop that’s open and also, one that stocks plain, natural yogurt. The first show I tried wasn’t open, no surprise. The second didn’t stock yogurt. That meant a much longer walk to the service station that I was sure was open and might, just might have yogurt. It was and it did. Success! The yogurt ice cream would be made after all.

With that task completed, I decided I’d go out and get an outside photo for the first one of the new year, because the sun was shining. I wandered around St Mo’s looking for a likely candidate before I remembered the little ladybird I’d seen away back at the beginning of December. It was still there. What’s more, it was moving. So it didn’t hibernate after all. It had chosen the east facing side of the tree which would be in the lee of the prevailing west wind. It had also chosen a spot with a bit of cover from the rain. Since I’d last seen it, it had survived 40mph winds and temperatures of -7ºc for three or four days in succession. Tough little cookies are ladybirds and that was the PoD.

Spoke to a bloke who was walking a friendly looking dog. The bloke told me it was a flat coated retriever. It certainly seemed well looked after and he said it would be even more friendly if I had some chicken, beef or liver with me. I told him it would be lucky, all I had was some stale bread for the ducks and swans. I know you’re not supposed to feed bread to ducks, but they don’t seem to have got that email yet. We said cheerio and went our different ways.

H&N arrived early just as I was beginning to clear the table. Scamp was busy and this time she had excelled herself with Salmon En Croute with roast potatoes, carrots and sugarsnap peas. Pudding was Pears in Red Wine, served with the Yogurt Ice Cream. Best she’s made, but that was only because I went the extra mile to get the yogurt!

After dinner we played Bears V Babies. A not very serious game with the most complicated rules ever. Still a good laugh and if not taken too seriously.

Let’s see how long they last.

Tomorrow? Don’t know. It depends on the weather and what H&N are doing.