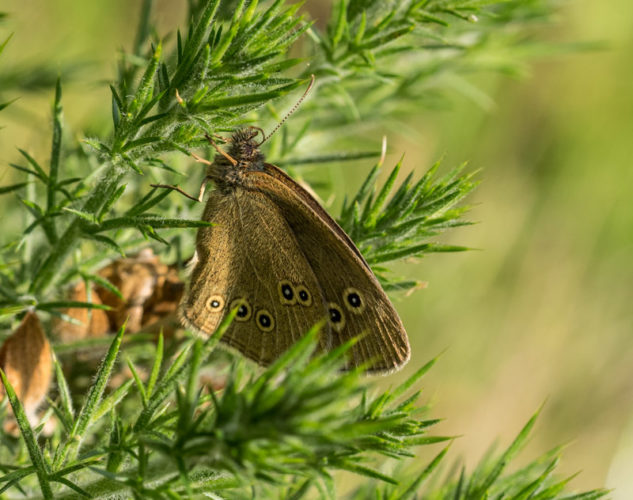 Well, not actually the postman, it was the Amazon man and he brought a parcel!

This was the first part of this week’s order. It turned out to be a bottle of Smidge, insect repellant and very good stuff I may add. Thank you Sim for recommending it – a year ago almost to the day! Also in the parcel was a pack of ten refillable fountain pen reservoirs. I only ordered one, but that gives me nine spares!

Drove down to the village after lunch to visit Isobel. We had a wander round her garden then we sat in the sun on her drying green, or drying asphalt as it actually was. She got us up to date on all that was happening in the village, in the garden and in the family. Then she kept us amused with tales of her life when she was a wee girl during the second world war. A very entertaining afternoon. Unfortunately there wasn’t much shade from the sun, and Scamp hadn’t put on sun block this morning, so we had to give our apologies and make tracks for home.

We’d watched a gang of four guys stripping the roof of one of the nearby houses in the morning. By the time we got home the entire roof had been cleared, including the sarking, back to bare rafters. New sarking had been nailed on and that was covered with roofing felt with strips laid for the new roof tiles which were neatly stacked on their slightly dodgy scaffolding. Maybe cowboys, but hard working ones

We’d stopped at M&S on the way home to get provisions for tonight’s dinner which was a fancy version of spaghetti with prawns. About half an hour after we got back, the Tesco order got delivered. Dumped it in the kitchen and Scamp told me to leave the rest to her and sent me out to get photos. The best one I got was of the butterfly. Still to ID it, but I remember taking photos of its aunt or uncle last year, so it will be in Flickr somewhere.

Today’s topic was Draw a Power Plug. Not riveting, but worth doing just to check your observation skills. It’s things we see every day that are the hardest to draw because we tend to draw what we think we see, not what we are observing.

Big day tomorrow, because we’ll find out what Lockdown Release part 2 brings us. Other than being glued to the TV for that, we have no plans.