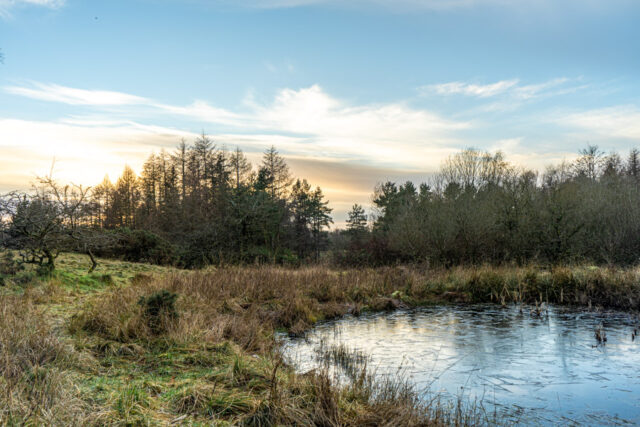 Out to lunch today.

Drove over to The Smiddy at Blair Drummond because it was a lovely spring-like January day and because the food is generally good and not too expensive. Great scenery too looking across the carse to the hills in the distance. I’m sure I’ve said all this before, but it bears repeating. The management of diners is improving because, while you still can’t book a table, you do get given a buzzer now when you arrive. This is a good ploy on their part, because it allows you to wander round the shop that is joined on to the cafe. While the cafe food is reasonably priced, the articles on sale in the shop range from expensive to exorbitant. Bottles of beer in the shop are more than twice the price of the same in Tesco. Lady’s masks, very prettily embroidered, are about £13 each. I though £15 was expensive for three reusable ones in Boots. Now I’m recalibrating.

We did have to wait a bit more than the ten minutes we were told when we entered, but we did get a table today! Service was slow. I had a home made beef burger that came with warm (ie, not hot) chips and the usual salad. Scamp had a Mac ’n’ Cheese also with those, just warm, chips. I don’t think they were deep fried chips, more oven baked, but they looked hand cut rather than reconstituted. But service was slow. I was glad that Scamp suggested we have coffee after we’d had our lunch. Coffee arrived without a spoon. It’s little things like that, that make you question whether you will rush back again. Yes, I realise it’s mid week and yes, I realise it was lunchtime, so it was busy, but if you want people to keep coming back you have to be on the ball these days.

I did take a couple of rushed shots while we were there, but the light was gone by then and it was my own fault for not taking them before we went in. Maybe next time, if there is a next time.

Back home after stopping at Lakeland/Sainsburys on the way for the makings of tomorrow’s pudding, I decided there was just enough light to get an hour in St Mo’s to bolster my collection from The Smiddy. It had been freezing during the night and the ponds were still frozen even late into the afternoon. I tested the ice on the wee pond and deemed it strong enough to hold the weight of the Sony with kit lens. It held, just, although there was a skin of water on top of the ice, so I was ready to whip it up and out of harm’s way at the first sound of cracking. As it turned out, the shot didn’t make the cut and PoD is a photo taken standing, with both hands on the camera, of the wee frozen pond.

WiFi disappeared tonight again at almost the same time it did yesterday. This time I phoned to complain and hopefully get an explanation. I got a sort of explanation that it’s an on-going repair. ‘They’ thought they had fixed it yesterday, but then found that the repair had failed today, so ‘they’ were working on it again tonight. I don’t know who the mysterious ‘they’ are and why they are only allowed to work at night. Maybe ‘they’ are nocturnal. Maybe Virgin are employing vampires who can’t work in daylight. That might be the case, because they are bleeding us dry for a service that’s not up to standard. The WiFi came back after a couple of hours, but the member of the Help Team I spoke to said it might happen again tomorrow until they find a solution.

So, I’d better get this posted in case it all goes a bit tricky again! Working tomorrow making dinner for Crawford & Nancy. Soup’s made tonight. Pudding is almost finished, but still lots to do tomorrow.