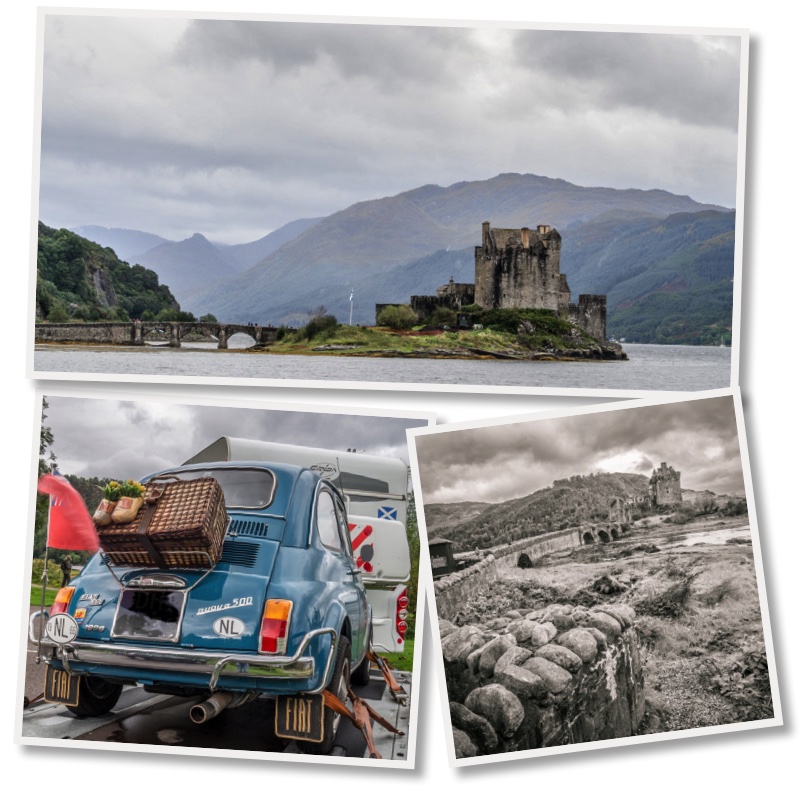 After a wild and windy night with rain battering on the bedroom window, we woke to face the journey home.  It was still windy, it was still raining and there was no sign of either of them abating.

After breakfast I turned the car round so it was facing into the wind.  That way the boot lid wouldn’t blow up when I was loading in the camera bags, rucsacks, luggage bags, flask, poly bags, books and even more bags.  Finally we were loaded up and ready to say our goodbyes and hit the road.

The first stint was from Staffin down the east side of Skye through Portree and Broadford to the bridge.  I thought we might have trouble crossing the bridge, but the wind had dropped a bit by the time we got there and the crossing was really very easy.  On down to Dornie and a chance to grab a couple of shots of Eilean Donan Castle.  The castle that has graced a thousand biscuit tins.  Over the causeway and a stop for a coffee and a scone in the castle tea room.  Despite its tartan and shortbread overload, the coffee is surprisingly good. It was there we saw the blue Fiat 500 on the flatbed being towed by the camper van.  I liked the little touch of the hamper, clogs and tulips.

From there it was the most scenic part of the road normally, but today the weather took most of the scenery away.  Another uneventful, but boring drive to Fort William to stock up on food and drink then get back on the road again.  That’s where we picked up a Wee Red Car.  Now look, I’ve got no problem with people staying within the speed limit and Fort Billy has a 40mph limit for most of its length, but when you see the white circle with the diagonal black line, that generally mean floor the pedal for a bit.  No, the Wee Red Car was determined that 40 was a comfortable speed.  Occasionally it would accelerate to 45, then drop back to 35 just so that it wouldn’t be caught out by any average-speed-cameras that tried to pop up in front of it.  They didn’t, but better safe than sorry the Wee Red Car said.  Of course, there were plenty straights when those following could have passed the WRC, but there were always cars coming the other way.  To add to the holdup, just before the head of the glen at Glencoe, there were ‘mobile roadworks’.  This turned out to be a Cooncil van acting as a convoy vehicle to slow folk down just in case the WRC didn’t do its job properly.

I’d intended stopping at Tyndrum, but I was so determined to pass the Wee Red Car, with Scamp’s consent we just continued on.  At Crianlarich I hoped against hope that the Red Bastard would take the new road down Loch Lomond side, and when it disappeared, I gave a silent cheer.  Then a couple of miles outside the village, there it was again, two cars in front of me.  How did it get there?  We reckon WRC was stuck at 45mph and drove at that speed through the village.  I waited my chance, with unaccustomed patience, dropped a gear and hammered it past both the cars in front of me, waving a victorious ‘Vicky’ to the WRC at the front of the line.  Life after that was just a bit boring.  No more Wee Red Cars to vent my anger on.

Arrived home just after 5pm, which meant we’d spent about 7 hours on the road, about par for the course.  Of course we’d have been home an hour or so earlier if it hadn’t been for the Wee Red Car, but then I wouldn’t have had much to write about, would I?

Lazy day planned for tomorrow with little or no driving.  Thanks for a great few day Murd and Jac1.  Also thanks to Jac2 for the tour round the Cow Shed.