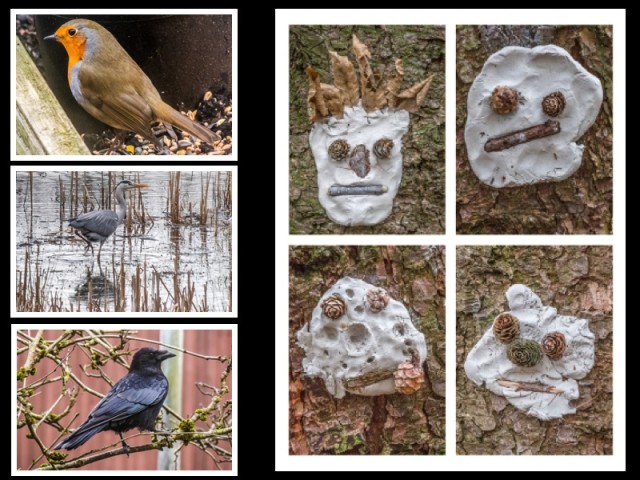 Yet another early rise. This one not as bad as yesterday, only 7.30 this morning. Taking the car to get its MOT. Taxi back from the garage because it’s about three miles away on a freezing cold morning and there’s no public transport to speak off there. Moped about for the rest of the day. Read more about the new camera and then updated the firmware on it and on the Panasonic lens. Didn’t realize you could get firmware for lenses. Got some decent photos of birds in the garden then after a few more tweaks to the bells and whistles, went to St Mo’s to spy on more birds and hopefully some deer.

Birds were easy, even Mr Grey was posing for some action shots, but the deer were off like the wind. I saw them, but they’d seen me long before. Then I spotted a fox, but couldn’t get a clear shot of it. One shot of the back of his head. That’s when I saw the clay faces. I remember photographing them some years ago in the woods behind the pond. These were obviously from the same source. Last time it was red clay, this time it was grey/white stuff. The decoration was the same. Twigs, leaves and pine cones. Some imaginative ideas there. I’m guessing it’s from one of the local schools. Don’t think the “Bucky Boys”have the intellect or the skill to make them.

Came home and made a pizza from the Nigel Slater book. Pizza base, mozzarella and an egg yolk on top. Quite delicious and very filling. Not for you though Hazy. It tasted all the better when the garage phoned to say the car had passed and was ready to pick up. Phoned a taxi and brought it home. Tomorrow it gets to go through the car wash for being a clever little Megane. I get a Laphroaig because I won’t be gettin up and driving too early. A good day.