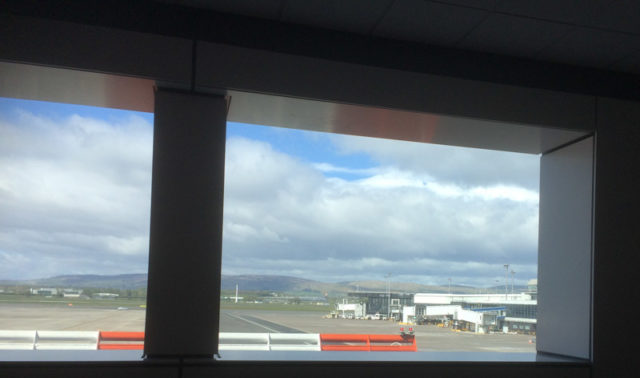 Footered around in the morning and packed our bags.  Got the bus to Glasgow and onward on the airport bus to the airport – obviously!  Got through all the technicalities and security then went for a late lunch which was a Fish Finger Sandwich and chips (shared) beer for me and a glass of red for Scamp.  All of this was done under a blue sky with fluffy white clouds.  Footered about again and then on the plane and off slightly earlier than expected into that blue sky and through the fluffy white clouds.

An hour later and we were on approach to Heathrow and there was rain streaking the windows and the clouds were grey.  This wasn’t what we had ordered.  We were expecting sunshine!  We were promised jetpacks!  Theresa had said it would be sunny, although Nick the Chick had warned us that if we went to england it would rain.  Stay in Sunny Scotland she’d said.  I wish we had listened to her now.  Never mind, we caught the little monorail to the South Terminal and from there got the train to Clapham and that’s where the Train Talk started.  It came from an opinionated teenager who apparently could have been a nuclear physicist and also a Nobel Prize winning biologist, but she had foregone all that to concentrate on sexual politics.   I was amazed to find that there weren’t just Ls and Bs and Gs and Ts, but there were also Polys, although that might have been Pollys, it wasn’t all that clear.  Also, you could get wristband and bracelets to denote which you were.  She described herself as like ‘Sadness’ “because I’m short and round.”  So, not just fat then?  All this information came in an almost no-stop flow of consciousness with the occasional interjection from one of her two train companions when they woke up.  The interjections also gave her time to breath.  Thankfully, we soon arrived at Clapham and she went further on her merry way and we went ours.

ND met us at the station and we were soon at the house.  Dinner was chicken salad and it was well received.  Fairly early to bed tonight, because it had been a long day.  I think Ms LGBTP will still be talking and talking and talking!