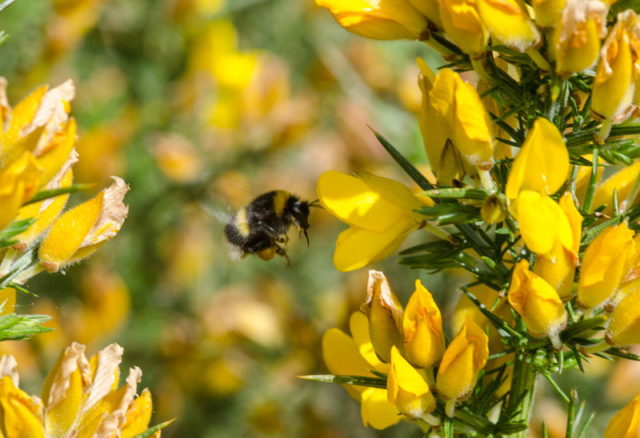 We woke to sunshine. No point in wasting it. Time to go out and walk.

We walked down through yesterday’s sketched underpass and on through the posh houses then across the dam at Broadwood. Walked round the exercise track without doing any exercises and then home for lunch.

After lunch, Scamp went for a walk around the shops and got the makings of dinner which was Veg Chilli. I started roughing out today’s sketch which was ‘Cutlery’. Officially it was ‘A Towel’, today being Towel Day to celebrate the life and work of Douglas Adams who wrote The Hitchhiker’s Guide To The Galaxy. If you don’t understand the towel thing, read the book. I got the basics down on my roughing sketch book then Hazy phoned so I spoke to her for a while. Scamp returned soon after that and also spoke for a while.

With the dinner planned and provisioned for and a rough sketch done, I went out for a walk in St Mo’s and got today’s PoD which is a White Tailed Bumblebee. Also got some clean, clear shots of one of the Canada Geese that have taken up residence in St Mo’s pond.

I quite liked tonight’s chilli, but then I would, I was chef. Scamp thought it needed more salt and also commented that it was a bit dry. I chose to disagree. There will be enough left for lunch tomorrow.

The proper drawing of the cutlery was much more difficult than I anticipated and I had decided I’d do it as an ink line drawing which leaves very little room for mistakes and corrections. In retrospect, it would have been better as a painting. Retrospect: The only 20-20 vision. It’s done and posted on Instagram and Facebook if you’re interested.

Big sensation of the day was Dominic Cummings’ refusal to accept that his actions in driving from London to Durham were a contradiction of the Government rules on Lockdown. Will he stay or will he go? That’s the question on everyone’s lips and the source of a host of memes.

Tomorrow I’m intending phoning Wheelcraft to enquire after my front wheel which they are supposed to be rebuilding. Otherwise no plans.