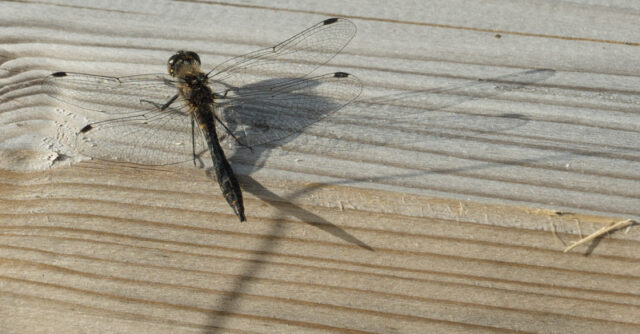 The message appeared on my phone and about ten seconds later on the computer.

I was cool, and calm before I collected. Had my coffee first then drove in to JL to pick up the parcel. Back home fairly sharpish on a beautiful SATURDAY, yes today was Saturday, morning. Unpacked it and it was a bit heavier than the A7 and maybe just a little bit bigger too, but it had more magic stuff inside it, so it was bound to be both heavier and larger. It was a Sony A7ii. Inevitably there was no power in the battery and the only way to charge it was in-camera with the adaptor and the cable provided. The A7 I’d owned for a few days came with a charger, which confirms my belief that it wasn’t just a display model. Someone had been using it for a fair amount of time. Don’t ever believe what the sales people tell you.

With the camera sitting charging I had time for a couple of slices of toast and a read at the manual, not the paper manual which had instructions in about 27 languages and was about 5cm thick. Instead I downloaded the PDF version which I can put on my phone, my tablet and my computer. I’d plenty time to read it, the charging process was going to take about 150 minutes. I think I counted each one. Eventually it was done and I could ‘play’ with the new toy. More buttons than the last one and a better button layout too. It was still a beautiful autumn day outside, so Scamp and I went for a walk … with the camera of course. I got today’s PoD on the walk, a Black Darter, one of the late hatching dragonflies. After that, Scamp went for a walk to the shops and I did another circuit of St Mo’s pond. The treeline was plagued with wee neds and nedettes today. Scamp felt sorry for them with a whole week off school and nowhere to go. I’m afraid I disagreed, having seen the other side of these poor children. Any excuse for a ‘bevvy’. Parents aren’t allowed to meet in groups of more than two households, but school kids can walk around in what one Principal Teacher once described as “tribes”. He was shouted down by many at the meeting, but secretly we all agreed with him. It’s all tribal at that age. 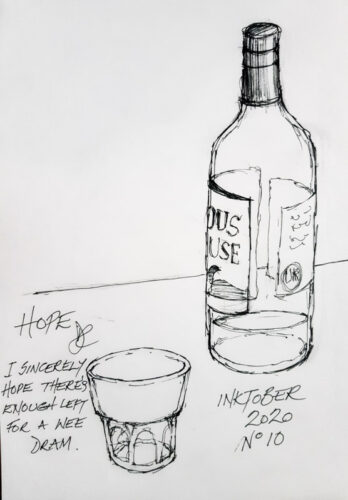 Messed about taking photos in the house until Scamp returned from the shops. I know I was just pushing the limits of the camera, putting it in situations that were far removed from real photography, but impressed when it passed the tests, one after the other.

Dinner was from Sim’s menu book again, Spinach Stuffed Chicken. It was lovely, served with broccoli and potatoes. Watched the qualifying for tomorrow’s GP from a cold Germany.

Sketch prompt was “Hope”. After a few false starts I settled on today’s subject, an almost empty whisky bottle and a glass. The link to Hope is in the sketch. Rather an abstract prompt and I nearly, just nearly gave up on it, but I liked the finished article.

May go for a walk tomorrow if the weather holds.