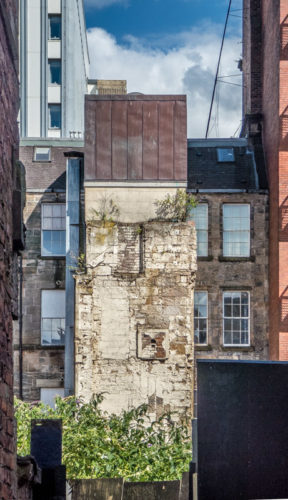 The 2B in question was a packet of 2B leads in Ryman. They wanted nearly £4 for them. I think not 2B.

Went to get some stuff, important stuff, like 2B leads for one thing and a pencil extender (which makes short stubby pencil ends usable again) for another. Scamp went for non-esssentials like a hat to keep the sun off and a scarf to do the same. Y’see, the sun was out today and it had its hat on, so Scamp needed one too. 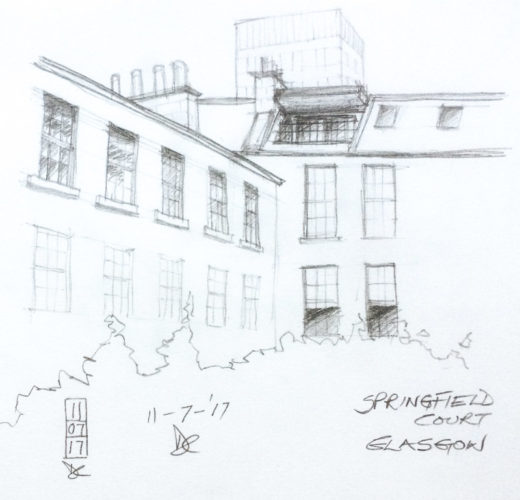 Went to get a drawing done too, because July has been deemed an odd month. Sketches must be done on odd days. Today was the 11th and I had to do a bit of catch-up and find one for Sunday the 9th. Got the 11th done. Did it in pencil for a change. The “Well, that’s odd!

” challenge doesn’t demand that sketches are done in ink, hence the desire for 2B leads and a pencil extender. Pens are not the only drawing tools. Today’s PoD was taken nearby in Springfield Court. I liked the textures and shapes on the wall.

Watched one of the worst singers, but best performers entertaining the punters outside M&S in Argyle St. He was singing Motown covers and doing it really badly, but he used up meters of mike cable covering the whole street. I’ve seen him before and his singing hasn’t improved since then. His act has. He made a nice change from the Bowie – Bolan bloke who neither looks nor sounds like either of them. I’m sure I heard him sing a Bowie song in his fake Bolan voice one day. It was a sort of crossover cover.

Cup of coffee in Nero and then it was time to head for home.

Earlier in the day we had been planting stuff in the garden in an attempt at tidying up the number of plant pots we have. I planted up a wee mystery plant that I’ve been growing from seed since last year. I don’t have a clue what it is. Originally there were three seedlings, but only two made it through the winter. One of the remainder seems to be thriving and one is struggling. I’ve planted up the stronger of the two because it has the best chance of survival. If it perks up, I’ll pot up its sickly friend.

Had a bit of a problem with the Linx 1010 tonight. It seems to lose its charge overnight. Can’t understand why, but I’m beginning to suspect it may have done a sneaky upgrade overnight last week with this new Creators Update that seems to be an automatic update. Must check tomorrow.

Tomorrow looks like an even better version of today’s weather. By the way, I finally got the 2B leads in Cass Art for £1.60!