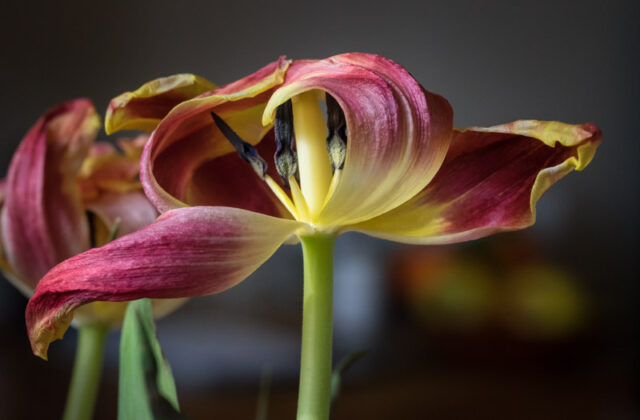 Just for a change!

Rather a late start, but that was because of a late night and a small dram of Tamnavulin last night. Just to help me in finishing off the last drawing of the February challenge.

It was a foggy start too, but you just knew the sun would burn it off if you gave it a chance. We gave it a chance and soon the sky was clear and there were only a few clouds sliding across it, however it was cold outside because the sun in early spring in Scotland takes a while to get it’s furnace pumped up to full heat. Sitting in the living room with the sun shining in, the light was wonderful. I used that light to illuminate what became today’s PoD which was a wilting tulip. Flowers are often more interesting when they are just past their display best, I think. I took a few, well, a couple of dozen photos of the tulips and hyacinths in that lovely directional light. While I was processing the results, Scamp went for a walk to the shops to get lunch.

After lunch we drove down to see Isobel who has a great wee sun trap at the side of her house. She had been out working in the garden and we sat for a while and exchanged books before we headed back home with some detailed instruction on when and what to prune in the garden. 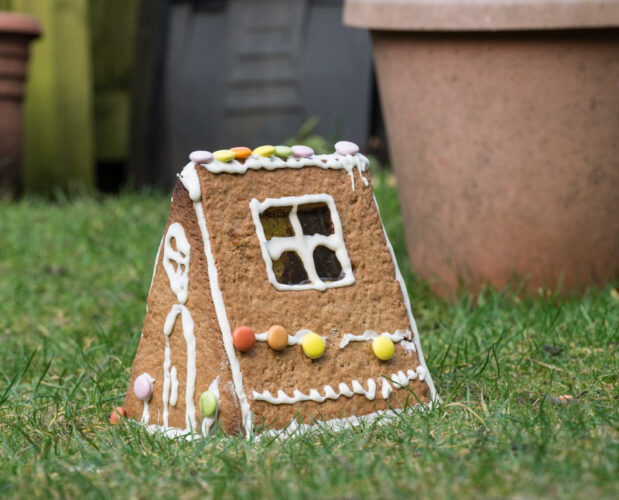 Just for a laugh we put the gingerbread house out in the back garden for the birds to eat. It was much later, while I was getting ready to make dinner that I noticed a movement in among the pots. At first I thought it was a dunnock (small brown bird that forages around the pots), but it was a wee mouse. It looked smaller than a house mouse, but the same colour. It seemed interested in the house or perhaps the smells coming from it. I don’t think we really want rodents in the garden, no matter what size they are, or how cute. I think I know where it/they are coming from. The old clothes pole I cut down last year is lying behind the pots. I’d forgotten all about it, but it would be a perfect home for a rodent family. Tomorrow I’ll saw it into manageable pieces and take it off to the tip.

It seems a bit strange to be sitting writing the blog without having to do a sketch too, but February is past and I need a rest from daily drawing for a while. Maybe later in the year, all being well.

Weather looks colder for the next few days. Today was just like a spring day, let’s hope the rest of the week remembers that it is meteorological spring. No plans for tomorrow.