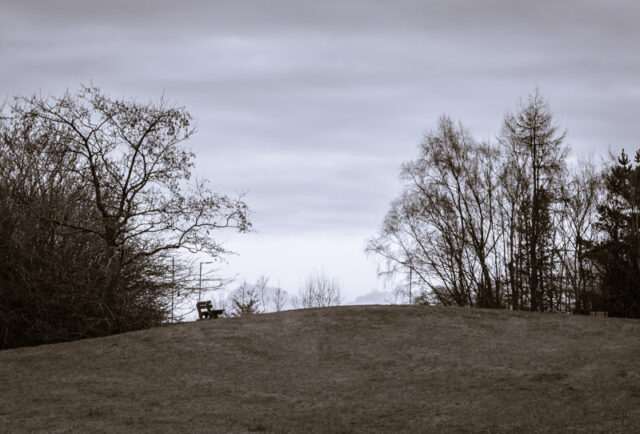 That’s not all we did today, but probably the most interesting thing.

I actually got up earlier than usual to start to tidy up the dining table. It was a shocking mess of cables, external hard drives, papers and just junk. All of it mine. Once it was fairly clear and not just dumped in another place, but filed away properly for once, I could start on the dough for the bagels. But first, it was time for a Sunday fry-up. Some traditions must be adhered to.

The bagel kit was part of my Christmas present from my son and his wife. Every month for six months a blue box appears on the mat with the ingredients and instructions to make some bread related food. This month’s had been languishing for a good few weeks. I’ve only once eaten a bagel and that was in Starbucks. As my daughter commented, it might not have been the most representative of bagels. All I knew about them was that they were boiled before they were baked, which sounded strange. Still, the dough awaited me. Got it mixed and kneaded and transferred to the bowl to prove (rise).

It would take a good hour or so for the dough to double in size, so we went for a walk in St Mo’s. The sky had started of milky white this morning and kept promising to clear, but it had just remained white all day. We went twice round the pond with lots of other folk who were also waiting for the emergence of that bit white disk in the sky. It didn’t happen and we all went home disappointed. All except one little girl with pale blue wellies who was discovering the delights of puddles and also the brilliant way that bulrushes smash into a thousand pieces when you bash them on the ground. Such simple pleasures are wasted on children.

I couldn’t see anything worth photographing, even with my new macro lens. I eventually settled on a shot of a park bench sitting under a tree. I spent an hour at home covering up the berm bend of a BMX track with grass in Lightroom and eventually made it PoD.

Back at the bakehouse I chopped up the dough into ten pieces and made them into doughnut shapes before boiling them in water for 45secs on each side (they float, you see). Then I sprinkled most of them with poppy seeds and baked them. The came out looking like the picture, but were a bit chewy and in need of some salt. However, having only once tried a bagel, I didn’t know if that was what they should taste like. I don’t know where you’d find anyone in Cumbersheugh who could tell you what a bagel is, far less where to buy one. Do you think Amazon sells them?

While I was bagel boiling and baking, Scamp was creating a fish pie. It’s one of her sister’s masterpieces and something we look forward to when we visit Skye. Hers was almost as good as the Skye Pie but was a lot of work. First cook the fish in milk, then let it cool. Make a sauce with the milk. Boil the potatoes and mash them with butter before assembling everything, adding some peas and bunging it in the fridge for a while. Finally baking it in the oven to heat it up and also to crisp up the potato topping. I thought it tasted fine, but Scamp, the perfectionist wasn’t sure. More investigation needed I think.

Dancing menu tonight was Mayfair Quickstep – Waltz Routine – Rumba Routine with new steps – Square Tango. We both felt we did really well with all of the above and Scamp got a quick thumbs up text from Stewart afterwards to confirm that we were doing well! Must keep up the good work during the week. 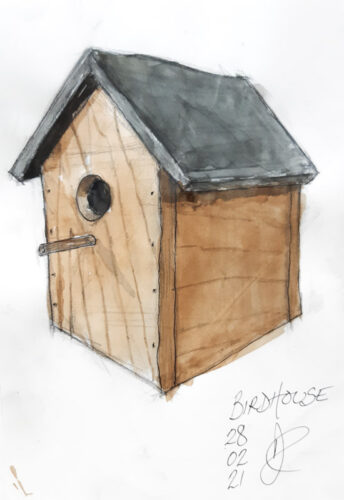 Final drawing for EDiF and 28DL was Bird Box. Mine was a simple wooden bird box like the ones we used to make in school. Birds don’t care about fancy painted details. All they are looking for is a place to hatch and rear their offspring. That’s what my drawing shows. All done for another year, although I may do EDiMay if the prompts take my fancy DV.

Spoke to JIC after the dance class and heard that they have actually been sitting out in their garden!!!  Probably without coats on too!!  What is the world coming to?

Our monthly Covid test is on the cards for tomorrow, otherwise the day is our own. Looks like a better day than today.