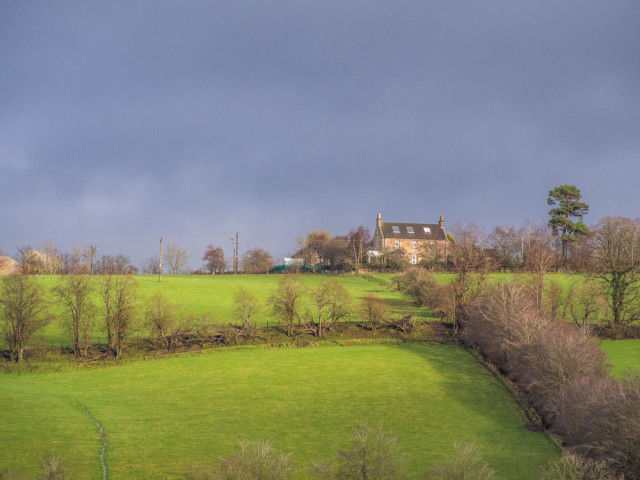 Although it was raining very heavily when we woke up, the weather improved all through the morning, so we decided to go for a drive in the sunlight, rather than go to the pool today. I fancied going to Culross (sorry Hazy) and Scamp wanted to go the Clydeside. We settled on Clydeside.

Rather than go straight down the motorway and waste hours going through the miles of roadworks from the M8 flyover to Hamilton I went through Airdrie, Newmains and Waterloo. Don’t worry if you haven’t got the foggiest idea of where I am, it’s not motorway, that’s all you need to know. Weather hadn’t been brilliant, but when we got to Waterloo we had a view across the Clyde Valley to Stonehouse and Strathaven bathed in bright sunshine making the grass glow! So that’s what sunshine is like.

Drove along Clydeside to Dobbies, or Sandyholm as we used to know it and got the above photo there, looking across to the sunny side of the river. Had a pleasant enough lunch, but inside of the garden centre was a shambles as they were getting rid of the Christmas tat and preparing for Easter which as we all know is when garden centres make the most money. “Buy your plants at Easter to plant them in your garden. Buy the plants that will actually grow in May.” I was told that by a gardener years ago and it’s very true.

On the way home we stopped at Mauldslie to try to get some photos, but the sun had gone for the day and we were back to ISO 10000 again. Time to go home. Still, I walked in the sunshine today again. Things may be looking up.

Oh yes, and it took just over 10 minutes to get through the roadworks on the motorway. But if I’d gone that way to start with I wouldn’t have seen Stonehouse bathed in sunshine.