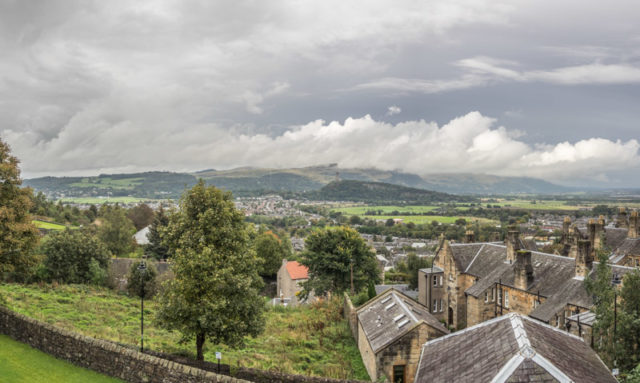 A day out and about in the rain.

Despite the rain this morning, Clive and I drove over to Coatbridge to go to Summerlee. Summerlee has changed its name at least three times since it opened, but basically it’s an industrial museum. Lots of interesting exhibits of machinery and historical items, all with an industrial connection to Lanarkshire. Some were made here and some were used here. It brought back a lot of memories to me and also to Clive, I’m sure. Back out into the rain after an hour or so and drove home.

Lunch, then out again. This time we were going up the Tak Ma Doon road, over the top and on to Stirling, taking in the scenery as we went. Drove up to Stirling Castle and had a short walk down into the upper part of the town. We were just too late to have a decent look inside the castle grounds, and to walk through the grounds of the Church of the Holy Rude.

Back in the Juke and on to David Stirling’s monument between Dunblane and Doune. I must say, this is my favourite panorama anywhere in the local area. The light on the hills, the animation of the statue with his coat apparently blowing in the wind and reason for it being there make it worth visiting. David Stirling was the man who started the SAS. Drove back home along the M9 and M80 with far less than the expected miles of jams to contend with which was a great bonus.

Tonight we went out to dinner at Milano. We all had pizza. Scamp had a Vegetarian Pizza while Clive and I had Quattro Stagioni Calzone. I meant to photograph the calzones. It’s the first time I’ve seen a pizza dough sliced into four pockets and each pocket filled with a different filling. Really excellent. Scamp discovered that we were sitting next to three girls she used to know and one of them knew a woman I worked with in Cumby High! What are the chances of that?

Drinks all round when we got home to celebrate an excellent week. Really enjoyed Clive’s company and sense of humour. He brightened up our week, hope we did the same for his.

On a sad note, we discovered today that Dorothy died last night. The funeral is on the 8th of October.

PoD for today is a pano made up from six portrait frames. Taken from Stirling Castle.

Tomorrow we are aiming to get up at 6am for an early breakfast before we drive Clive to the airport.