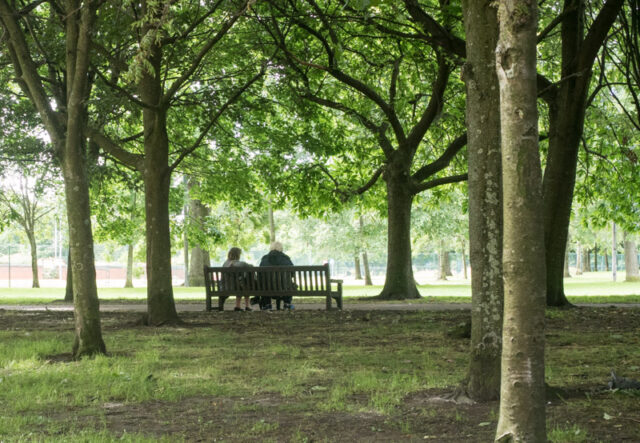 The park in question was Glasgow Green. Long time no see.

Today at Scamp’s suggestion, we went for a walk along Glasgow Green. Simply ages since we’ve been down there, but today we did. We walked along to the McLennan arch. I can never remember whether it’s McLellan or McLennan. It’s definitely McLennan because I’ve just checked on Google so you don’t have to. Anyway, before I lose the thread, we walked along to the McLennan arch and from there along beside the river to the suspension bridge where eager joggers were running along it making it bounce. Always a source of amusement as long as you weren’t trying to take a photo with a slow shutter speed. I wasn’t, so it was funny.

Back home it was lunch time, then Scamp was off into the garden, weeding and pruning and generally plant bothering. I was struggling with Friday’s Sudoku. Friday’s!? I must be slipping. Eventually I gave up and wandered down to the shops via the wildflower area behind St Mo’s. Not a lot of insect life there today. A few butterflies and a ladybird that was determined to avoid the big man with the glass tube on a box. Couldn’t blame the poor thing. Imagine if you were being pursued by a giant carrying a glass tube and constantly poking it near you. That’s the stuff of nightmares. Or is that just me?
Anyway, I got the stuff I needed for pasta with meatballs. I’d made the actual meatballs earlier, a mix of pork mince and bacon which actually worked well.

Back home it was time to start making the sauce which was a basic marinara sauce same as I’d made last week. After cooking away for 40 minutes or so it was reduced enough and the meatballs were cooked. It tasted ok, but really needed something more to make it sing. Maybe a few more herbs or some spice to brighten it up. Maybe next time. Scamp has salmon with potatoes and a spoonful of my sauce. She wasn’t impressed with her salmon either. Maybe it was just us. Maybe it was just a bad day.

Pudding was “a sort of Eton Mess”. It didn’t sound all that impressive, but it tasted brilliant. Scamp as usual talking down her culinary expertise. Simple and tasty too.

Big test next. Will Scamp like the Sunday Coffee? I needn’t have worried. It got a definite thumbs up. Especial mention for the creamy foamed milk. She even bragged about it when we talked to JIC later. Found out that he doesn’t have to cool the boiler in his upmarket coffee machine because it has two boilers. One for steam and one for coffee. That explains it. Mine does the job for me and produces great espressos and has the ability to make creamy foamed milk too. You just as Scamp and she’ll tell you.

Apart from the walk in The Green today there wasn’t a lot going on, although I got a PoD which was the second shot I took and achieved about 15,000 steps and eight active hours. Didn’t do a sketch, will cover that tomorrow, hopefully. We may go out.