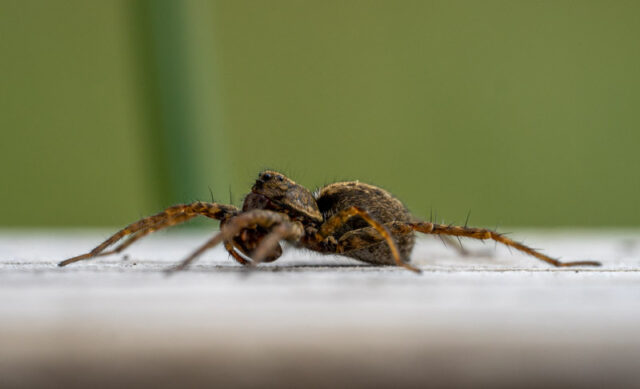 However, brighter days are on the horizon, we’re told.

Scamp was off to Calder’s for lunch with Annette and I was left to my own devices. Always a dangerous thing to do. As it happened I didn’t really do much damage today. I hoovered the painting room because there was a lot of those sticky covers from the buds on the trees. They stick to you shoes and then transfer to the carpet later to be ground in. Luckily the Dyson knows how to deal with them. Didn’t do much else with my freedom, other than try to find a way to partition an NTFS drive on a Mac. Apparently it can’t be done without a lot of work and I wasn’t going to waste more time on trying.

Just before Scamp returned, I gave up and took the car out for a run with two cameras in the boot. I was hoping to give the Sony with the Sigma macro a chance to show what it could do with the new damselflies, except there didn’t seem to be any of the flying creatures around today. There were lots of Wolf Spiders wandering along the boardwalk. I chose to annoy them instead. Saw a spider on spider fight that was as good as anything Hollywood has to offer and probably more violent than is allowed on the BBC. These guys, and it was guys, were throwing everything into this battle. They actually rolled across the upstand of the boardwalk and fell off into the water of the pond. Can spiders swim? I hope so, or at least I hope they are quick learners. Soon more arrived to fill their place. It was mating time again I think. One lateral shot of a female wolf got PoD. Not the prettiest face I’ve seen, but beauty they say is in the eye of the spider who won the fight and learned to swim.

After the photo session I drove to Kilsyth, more exactly I drove to Lidl. Bought a lemon to replace the mouldy one at home. Then a host of more fattening things that took my eye. The lemon along with its other three yellow buddies is going to make Limoncello. Sugar, Vodka and the best lemons you can find. That’s all there is to it, that and a fair bit of work. Maybe tomorrow I’ll start the manufacturing process. It worked the last time and I’ve just finished the last bottle, so it’s time to start again. 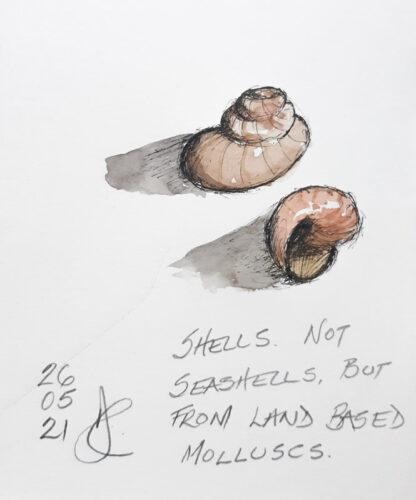 Today’s prompt was Something You Collected Outside. I couldn’t think what to draw, but then I remembered I used to pick up old empty snail shells, especially small ones. They are so fine and delicate and to think that some creature creates this shelter for itself. What does it create it from? How does it form it? Probably, like so many things these days, the answer is but a click away. I’m talking here about land based snails, not cockles or winkles or any of the sea snails. Their heavy thick walled shells didn’t interest me.

Tomorrow we may go out for a run. Tesco are delivering tomorrow night, so we can’t be away too long. Of course, all of this is dependent on the weather fairies getting things right!